With this last unit, my 40mm-ish Napoleonic skirmish collection is finished....probably.....

A recent game I hosted went well I thought as the very simple home-brew rules survived intact from the constant wining and complaints from the boys of the "Francis' Regulars".  The only legitimate complaint - the '"I can't win!" types don't count - was the varying unit sizes as the larger contingents did have a certain advantage in that all other modifiers were to be equal.  So I decided to rearrange some of the units to have all equal at 10 figures each. Somewhat difficult as each of the Alternative Armies contingents have no consistency of scale and I have a bit of CDO  {just like OCD but the letters are in the correct order!}

My goal for the year - and the next - is to complete some of the collections I already have and to have rules and organization ready prepared for future games.  This 'Spanish line' unit is the last of the painting for these. 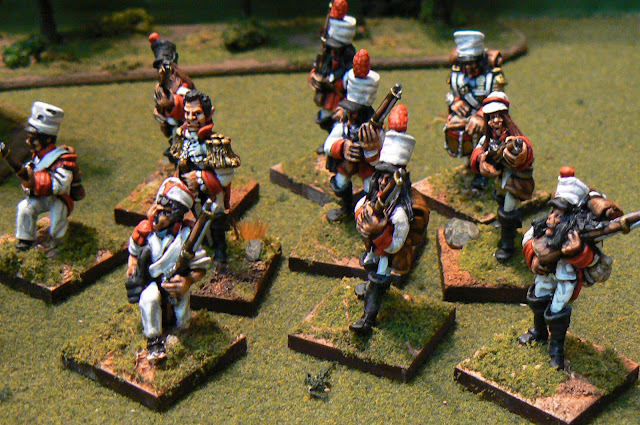 The "uniform" and colours are somewhat stylized as these are fantasy types and so the sculptor has made some interesting choices in equipment and clothing cut; but in general, the effect is Napoleonic in nature.  My collection is solely focused upon the Spanish campaign and so if the elves are not French they form the Spanish contingent.

Having a new light for the table I simply took a photo before they go, if I am honest, into a box to languish for a long time before I put on another game......sigh.....

Well...at least for a year anyway... (a rather lame New Years Eve joke)

While perhaps doing basing of your miniatures might only have the simple representation of grass or going very basic 'old-school' and just painting the base green and be done with; often its behooves the modeler to put a bit of work into the basing to enhance the look.  A wargaming buddy provided pictures of his new units with the commentary that he added rocks and downed tree trunks in an effort to "Doug them" up a bit.  ( Grin. )

Here are a few pictures of my 're-organized' American Militiamen of War of 1812 I did quite some time ago.
I separated the 'marching' pose from those of a more 'skirmishing' nature.  (I did not like the mix together) separating the two types and then adding the Kuckleduster command figures.

One of disadvantages of large bases is the difficulties imposed upon the terrain.  This is especially true of bridges (and villages among other features) It looks rather peculiar to have a large element suspended over a narrow causeway and should combat occur, disputes can erupt over positioning.
With this in mind I created an 'expanded bridge' over my existing waterway for the large napoleonic bases we use. 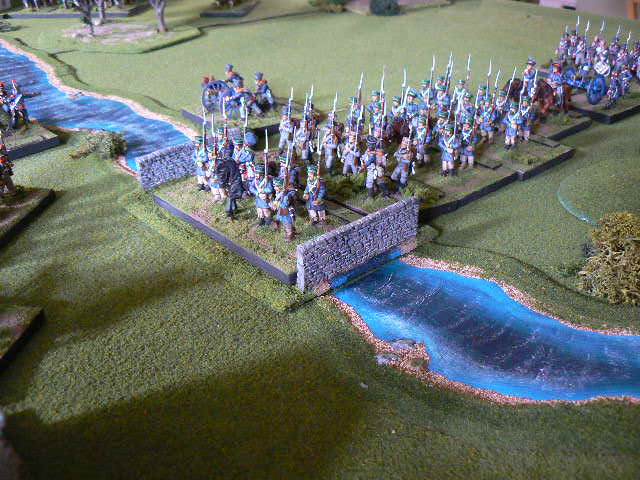 The bridge is a solid piece of hardboard with short pieces of resin stone walls set slightly inside the ends so I could paint in the continuation of the latex waterway so it looks like the stream continues 'under' the walls.  Effective enough from a distance.
The rivers are from Wizard Kraft link