Hosted a “Napoleonic Skirmish” game using my old collection of 40mm-ish Flintloque figures; fantasy figures of the Napoleonic era and loosely based upon -originally- the ‘Sharpe’ series of historical fiction novels by Bernard Cornwell.  But now it has expanded to included toads, dogs, undead and other such creatures.
Years ago a local fellow was a major distributor who wanted some painted which I did in exchange for some of the figures.  I went about divesting the Orcs (their British types) of the tusks, the Elves (their French “Franche”) of pointy ears, and gathered together different historical units of Bog Orcs (their Irish) for a collection geared for the Peninsular War in Spain.
I tried to keep it roughly historical; the uniforms are as close as the sculpting allows.

Units are all the same size, no national characteristics, all fight the same.  And no 'morale'; all continue to move along happily until 'dead'.  Simplicity reduces the necessity of the number of rules to remember quite a bit I found.  Thus rules are homemade and simple…real simple…for a convention setting you understand.
The kinda rules that have 6’s and 1’s hit regardless.  Why the “and 1s” you ask?  I seem only to roll 1’s and I want to have hits too!  Actions by the highest card played by each of the players.  Combat conducted with the highest dice rolled.  That sort of rules in play.  A five year old should certainly understand it, so it hopefully should work well enough at the local wargames club for a pick-up game……

photos from the game:

I volunteered to use my collection to occasionally fight out the miniatures battles of a campaign organized by David (see:link) Not knowing of the players or their intentions, it is very interesting getting "marching orders" without knowing the larger picture.  Just as a soldier in like real life!

Part 1 of this campaign (for me) was the playing out of the maneuvers of the players for the Battle of Thuin.

It was a wonderful asset to have a portion of the reserve to reinforce his contingent Steinmetz mused. But for it to be of full use, it must be deployed, along with his own artillery, in the open plain in front of the town.  To protect the guns, he was forced to deploy before the town and not in the better defensive position within, and thus, in the open.  He hoped the guns might reduce the French attack but it would depend upon the numbers the French would place against him.  He certainly wondered why he was so isolated.

Steinmetz deployed his meager units in a line south of the town, with the jagers in the woods in a position to offer a threat to the French left as they advanced from the south.  The various limbers, wagons and caissons of the artillery were arrayed in an area to the north-west of the town along the road network.

The French General Vandamme certainly did not believe in subtlety and advanced on a broad front with his horse on the far right (east) to swing in behind Thuin to cut off any Prussian retreat.
He soon discovered the firepower of the extra guns used by the Prussians but continued to press the point. One of Lefol’s brigades recoiled out to the woods in a failed attempt to clear the Prussian jagers and Vandamme was forced to move his reserve of Girard’s small division to keep the jagers threat at bay.

With the massed Prussian guns slowly reducing his effectiveness, Vandamme had no choice but to move into the Prussian infantry defending the guns in a sweeping attack, even though at poor odds. From 10am to noon, there was attack and counter attack as the guns boomed.

Hearing the cannon fire, French Cavalry General Kellerman hastened his pace; but shortly, exhausted couriers gave him word of a Prussian cavalry force following him.  As he gave a questioning thought of how did the Germans get in behind him, he issued orders to about face and meet this new threat.  Those officers whose units were indeed among the Prussian wagons placed behind Thuin also gave pause to question why, in the moment of attack, they were ordered to about face and move away, but such is the maneuvers of war.

However, the effect of masses of French cavalry near the Prussian rear echelon and the subsequent panic by the wagoners strained the morale of the Prussian force which, for the moment held, as the 24th Regiment counterattacked to protect the guns and the 12th refused its left from being outflanked.

The indomitable red-coated Swiss of Habert’s Brigade broke the 24th exposing the whole Prussian centre. So by noon the Prussian line was essentially broken with their substantial artillery intact but near to be overrun with nowhere to retreat as the town would inhibit any rapid withdrawal.

Battle of Thuin…. the afternoon

Around noon Vandamme needed to reorganize his infantry supports bringing fresh troops in his continuing head-on attacks on the massed Prussian guns.  While these attacks forced the Prussian guns to flee, the French suffered further casualties but nonetheless were in a position to take the village of Thuin by 2pm.

To the north of Thuin, Kellerman with his heavy cavalry now facing the new Prussian force from the north.  Leaving his small contingent of horse-artillery on the road he extended his troops to the right. The leading Prussian light horse fell back from the French advance exposing the columns of Ziethen's Prussian infantry in squares and the Prussian artillery which quickly eliminated the French cannon. Now faced with a large corps sized force ready to withstand any charge, with a good cavalry reserve and plenty of artillery, Kellerman was forced with the impossibility of attack due to the complete lack infantry support and, if remaining in position, only the slow destruction of his force by cannon fire. Rather than wait for the infantry of Vandamme to mop up the Prussian forces remaining around Thuin to eventually come to his ‘rescue’, Kellerman would again about-face his horsemen and cross the river to link up with Vandamme.

As Kellerman was facing his choices to the north, Surprisingly, the Prussian morale of Steinmetz’s command at Thuin was still holding (the required 6 was rolled!) allowing some of the remaining Prussian units to take a defensive position in the eastern section of the town.

In spite of Vandamme’s success, his was spent force by 2pm, and no more action would be taken.  He spent the rest of the day consolidating his force south of the town.

Kellerman retreated before Ziethen [ “My command then advanced in a different direction” he wrote in his report to Napoleon ] and fell into the fleeing Prussian limbers and caissons of the Prussian Reserve Artillery thus eliminating this force from the campaign. Late in the afternoon he would meet up with Vandamme south of Thuin.

Zeithen for his part, was confused about the French intentions and so halted his advance at the north side of the bridge.

Steinmetz remaining very weak brigade held half the town but any further French attacks would inevitably have it destroyed.

12 figures.... only 1 point... for my Lion Rampant Japanese Clan.
While I don't really know if doing these 12 figures is worth doing for only the 1 point value for my Lion Rampant games, it was interesting to do nonetheless.  I used one pack each of the Perry peasants advancing and Ikko Ikki (the poses with some armour) . 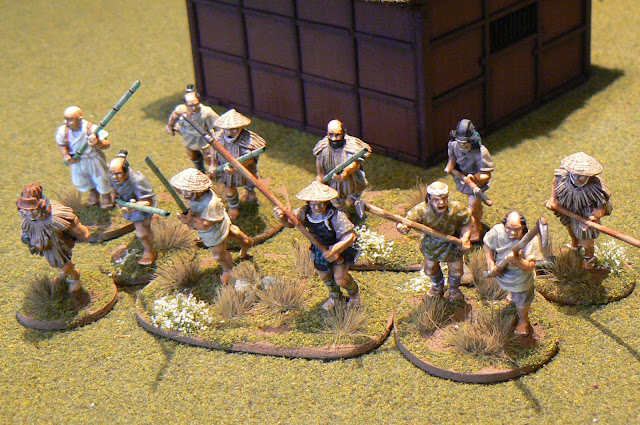 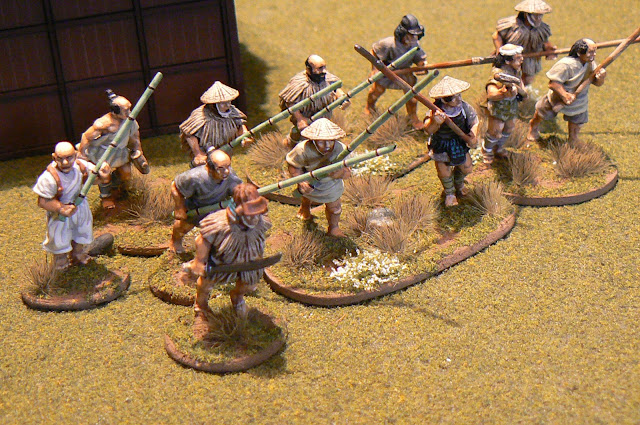 Most of the spears and weapons supplied I wasn't thrilled about so I replaced some with a sturdy length of steel rod, angled the end to a point and painted as green bamboo. Yes, fresh bamboo would not be a good choice but I take it as an expediency for the poor people of the village and more interesting to paint than plain wood. 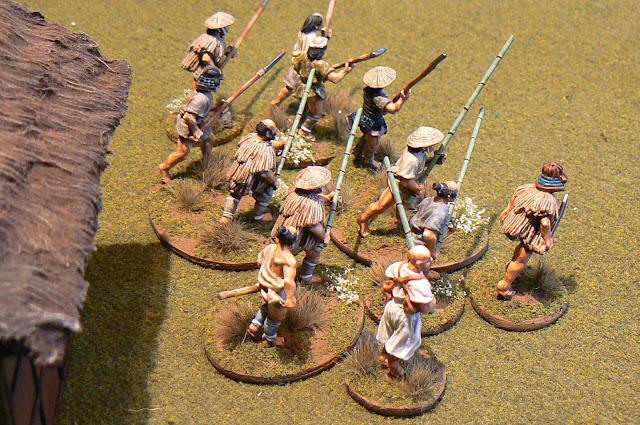 I used the smaller 1 and 2 figure basing for this unit feeling it will give a 'closer' feel of the unit portraying the fear which they might have, facing more trained troops --- and make casualty removal that much easier!
The bases are, again, random shaped to prevent the 'ranked' deployment unlikely for these people.

It is one of those obvious but often overlooked things about a new collection/army/"project" that we miniatures wargamers must account for is the terrain and environment within our forces must 'fight'.  Foremost of these pieces are buildings, as they are the most obvious display of the era and conflict.

Thus with my growing forces of samurai and ashigaru I had to add some buildings as this is my first excursion 'east'.   The local hobby store stocks 4Ground buildings.  These are "prefab" MDF thin wood constructs which can be glued together.  Other than a few oh-darn-I-put-that-piece-in-backwards!! moments, they went together well, with good precision. The pieces are laser cut and the lingering smell of burnt wood might last awhile.  I was showing my wife my efforts and after the obligatory "That's nice, dear", she questioned if the neighbours had their fireplace on.  Her good nose still noticed the smell even after days of the finished model sitting in the open.

As most of the model is "pre-painted" I did little painting other than the top of the roof design which I painted a similar color to that of the rest of the wood; and the overhang of the house which I felt a little too light a wood shade and gave it a heavy wash instead to maintain the dark planking marks. 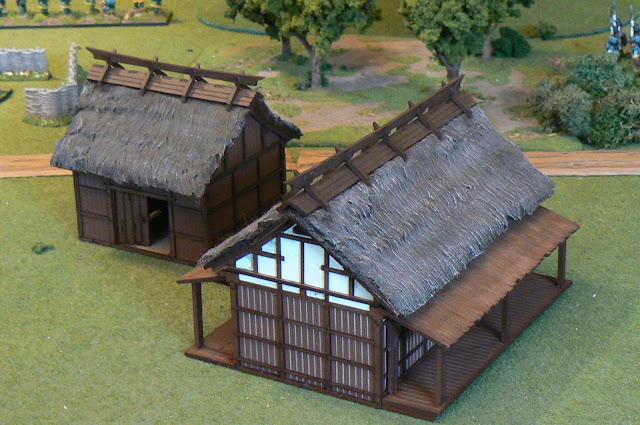 The main alteration was with the 'thatch' roof which was supplied with the model and made from teddy-bear fur!  The Japanese roof design is slightly outward at the top but the supplied fur for both models was laying in the wrong direction!  However I pulled and stretched the fur backing.

Once glued firmly in place, and using painters tape to protect the roof ends of the model as I knew it would be messy work,  I brought out a very large stiff haired brush to mix and apply a heavy  combination of dark paint, white glue, and a bit of water, over the entire roof.  This pasted down the golden tinted 'hair' to make it slightly more "thatchy"  I hoped.  A comb was used to slightly uplift  horizontal lines to simulate the layers of thatch.  A light dry-brush of a dull grey tries to replicate the weathered effects of old materials. 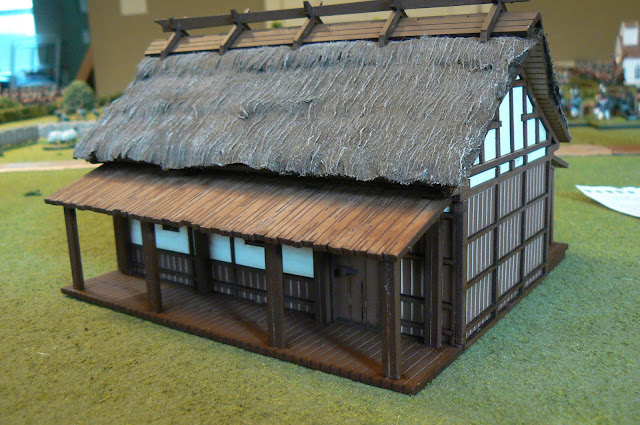 As it was my very first attempt at teddybear fur, I was nervous about its effectiveness but I think it looks the part (having never seen the real thing, mind you!) and looks a bit better than the original manufacturers model I feel.  Nevertheless, now I have "context" for my samurai battles of the future.