the 3rd Battles - at Enfilade

Made the big effort at this year's Enfilade wargame convention held by NHMGS in Olympia, WA, USA, along with the many Canadians who attend, and co-hosted two large Napoleonic games using a ruleset in development by Seth and myself.  In short, their concept is for the convention game: keep it simple, effective, easy to use, and which gives a historic result. All this with 28mm figures on a small 8 by 5 foot table for 6 to 12 players.  And make it enjoyable.
It is a corps level game.  We don't care what the regimental captain does.  One cannot command skirmishers and be Napoleon.  We don't even want to try.

It is thus, that we tried the 3rd Battle of Ligny.  The first two games resulted in roughly historic results (see previous posts 1st Battle, 2nd Battle )  Now let us throw in all the  "what if" options ! The theme for the convention was "obscure" battles.  We all know of Waterloo, of this engagement, not so much......


Perponcher's Dutch-Belgian Division sent by Wellington to help the Prussians.  This is one of those "what-if" scenarios which I decided to add to this play of this historical battle.  As I played it historically accurately in the previous two attempts, both of which resulted in the mimic to the actual action,  this time I added all the possible contingents which 'could have' arrived to influence the outcome.   Thus Bulow 's corps did arrive, as did the French corps early under Lobau.   Perponcher was sent by Wellington as we must assume the Quatre Bras crossroad was not attacked early by Ney's French and thus this contingent could be provided.  Probably historically accurate as Wellington would be unlikely to send any native British units away from his command and would have likely sacrificed these 'foreign' troops saying they were still part of his army and thus in the agreement to assist Blucher if he was not attacked.

In our re-creation, they came at Marbais at the right corner of the Prussian deployment area and were moving down along the French bank of the stream.  They would have run into D'Erlons's corps at some point.

There is not much to tell of the game itself as the players were running it themselves by the fourth turn and so with time to chat about particulars of the rules which came up from time to time, I kinda lost track of the play in between.

The 3rd Battle of LaRotherie
held the next evening

To allow a comparison for results between the various developments of the rules, we have chosen to use the same historical scenario.  LaRotherie was the second major battle of the Campaign for France in 1814 and our third time running this game.

While we tried to be relatively accurate in the design, we must admit that Seth and I have not ..yet?... painted any Russians which under Blucher's aggressive leadership were foremost in the attack.  So we substituted part of Seth's growing Austrian for them as well as he supplied the Austrians, Wurttemburgers and Bavarians who rounded out the Allies contingents.

For my part, supplying the French side, I spent some time in the hotel room, re-labeling some of those French elements which fought on Friday to indicate the new commands.  If viewing the photos of our games, you might note that we leave a space at the rear of our stands to allow an attachment by temporary gummy tack a green piece of card with the historical General's name in order that the players can identify their command.  Not too glaring when viewed by the casual observer.
The following three photos shows close-ups of Seth's 'white tide' of Austrians.  The same basing technique unifies the look of the figures on the tabletop regardless of designer or painter. 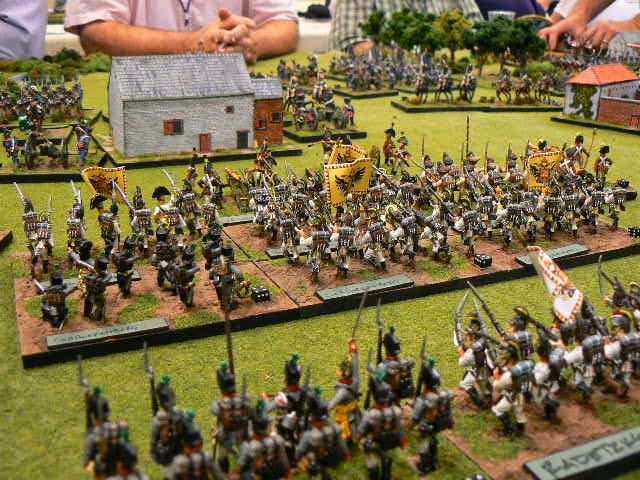 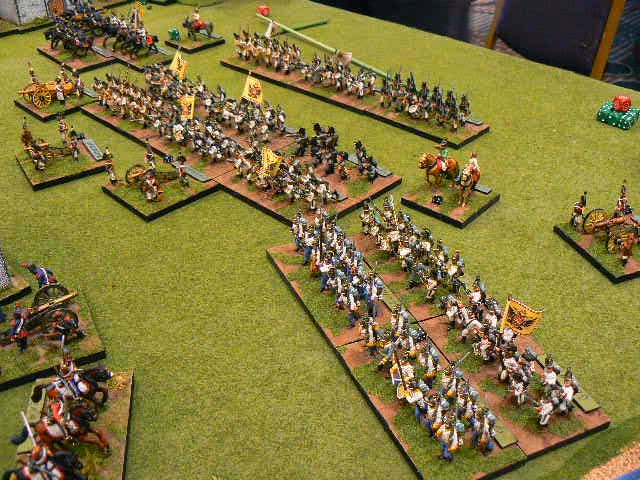 The results had the French continue to hold the defensive line of villages for the victory.  The damage taken from artillery was too?? extensive which really hurt the Allies assault and which we will address.  Nevertheless for a late Saturday night with everyone fatigued and Seth and I somewhat out of voice, it when reasonably well.
Of course talk of Leipzig (only the largest battle of the entire Napoleonic era !!) keeps popping up..... we very silly boys.....

Still trying to recover once again from attending this great Washington State convention.

Quote of the Weekend:
from around the Napoleonics table

"A couple of years ago we had to play Austerlitz using figures with shakos.  I really don't know how we got through it"

Not to shorten the brief time my wife and I would have to explore London and Paris and not to bore the wife with endless staring at old clothing and armor, I dedicated only one military museum per city.  For Paris it had to be the Musee de l'Armee (the Army Museum) located in the Hotel des Invalides situated conveniently near-ish the numerous other tourist locales. 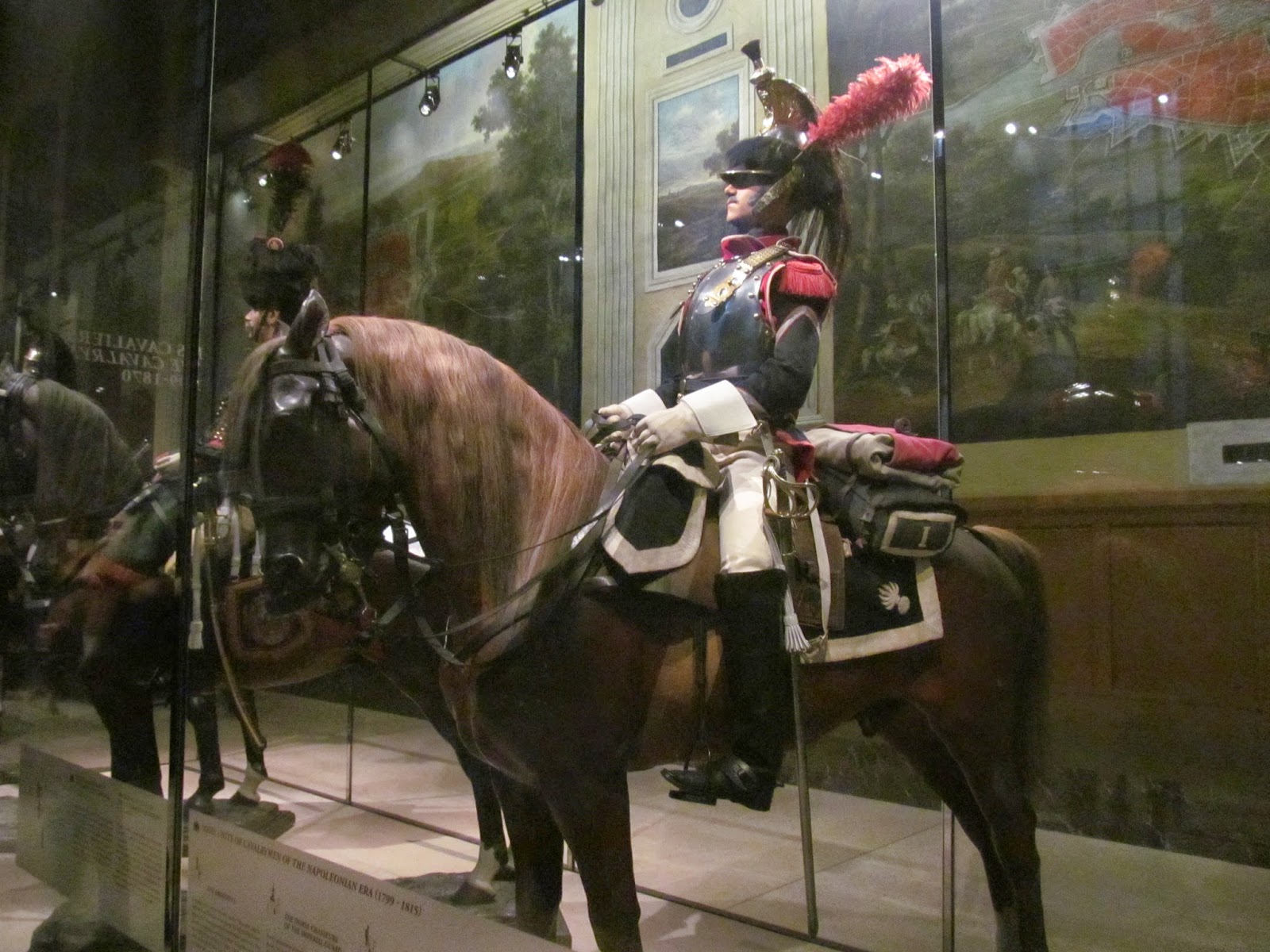 While we lingered at the early periods and the Napoleonic eras, the museum has extensive other sections.  While the layout of the museum is not particularly easy to discover and the museum signage is not well conceived (except to mark the way out!) other rooms had other nations and eras.

The World Wars were particularly well displayed which we toured through and of more interest with the wife as it seems more 'current' than the "old shit" I like.  Both of us would have liked to spend more time but having closing near and having spent six hours already (!) we were near the last to leave.  I missed the gift shop as it closed early but it did not seem all that impressive; the usual poor souvenir items, behind the glass.
Nevertheless, a remarkable collection for the military buff;  now off the wargamer in me 'bucket list'. 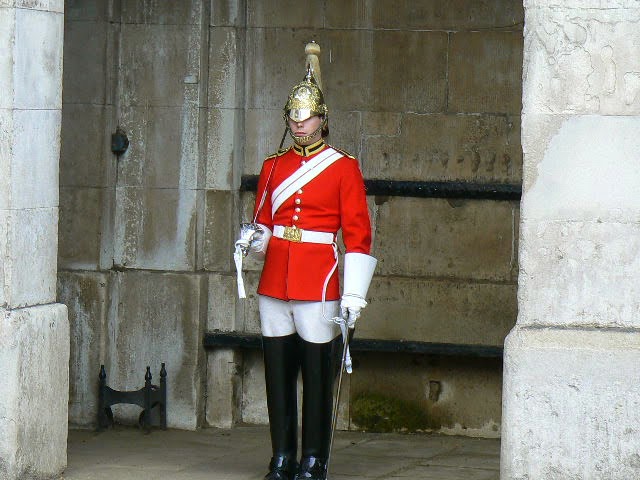 Horse Guards Museum, London
A small but interesting museum of the history and current activities of the Household Regiments.

The museum had an example of the heavy boots which one could touch (and indeed wear!).  They have much the same suppleness as very tall stiff ski boots! We saw him walk with these and indeed, if one has ever walked to the chalet in tight ski boots, you get the idea.  Together with cuirass armour  ( which one could also handle.  Heavy indeed! ) and helmet, standing at attention with sword in hand, is an ordeal. 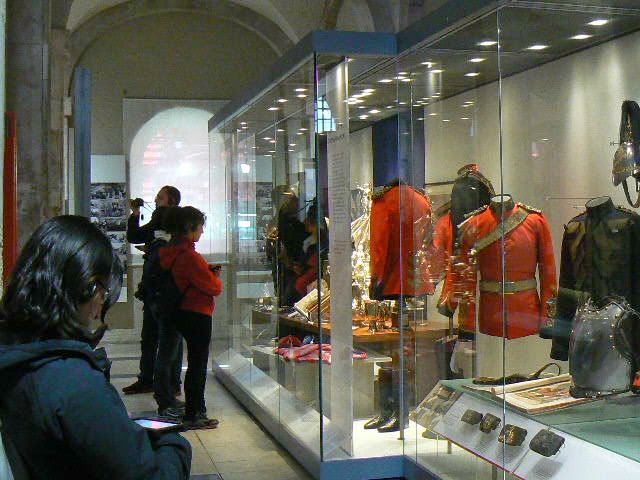 Along with the Guard infantry, they make it known that they are still a modern fighting force and active in current actions along with the pomp, large horses and shiny helmets.  In this, they are unique.

back from London and Paris

"Oui, suffering from jet lag but all is well from your trip. Tres Bien. Yes, I will tell your t'ree readers you will post shortly."
Posted by DougH at 19:33 No comments:
Labels: blogging
Newer Posts Older Posts Home
Subscribe to: Posts (Atom)