After we left the last battle in this fictional campaign in a distant shire during the English Civil War, the main contestants swept through the region, taking with them many of the fighting forces for both sides.  After many months of peace,  the shire saw the return of the Earl of Rockforth and the return of strife in the Shire.

Lord Brooke was by now burdened by ill heath but still formed the main opposition Rockforth’s return.  He funded the first military response by authorizing the ambush of the Earl which was conducted near Sheppard’s Farm.  While few good units were yet available, Longe’s musketeers were a solid unit.  Ballard’s Shotte were thought to be a poor unit, but as we shall see, they performed admirably during this engagement.  These Tawney troops along with a small cannon and Lord Brooke’s own commanded shot, sought to delay or even defeat Rockforth’s army.

To that end, Longe’s muskets were placed in the woods with Ballard’s Shotte on the hill with the small cannon on a mound opposite.  The commanded shot held the rear of what was essentially a box into which the Earl’s troops would enter.

The trap was set but would require good timing.  The signal was to be the cannon but in good “Rampant-y” style it did not fire!  Ballard’s men who could see the gun also did not fire (they also failed activation) but Longe’s musketeers hiding along the woods edge, who had already allowed the Earl’s sedan chair to pass, grew impatient and Longe allowed them to fire at Hampden’s passing regiment.

The Earl’s army, shocked but not disordered, readied themselves.  Longe was to “shoote and scoote” but decided on another volley but the hurried order had the result of a half-hearted effect but it was enough for the Hampden pike to withdraw.

The small cannon finally fired and the shot barely missed the sedan chair. [ I made it that 4 hits were necessary to kill a horse or damage the chair in some way, 6 hits would kill the Earl ]

Hastings, leading his cuirassiers, finding a target for their wraith, charged Ballard’s Shotte but Ballard’s men surprisingly only moved back from each charge in good order like veterans  [ their ‘courage’ rolls were 11 or 12 on the dice throughout the battle! ]  but finally needed to retire to refuge of the chavel de frise of sharpened stakes which was their handiwork the day before, allowing them to fight off the pursing cuirassiers who finally evaporated in exhaustion.

The Earl’s transport, now under great control by his retainers (rolled a 12 for activation move) moved the the protection of Hampden’s Pike and ordered them and the nearby pike of Robart’s to “take the Godd**n cannon!”

Startled by the reappearance of Longe’s Musketeers who had previously moved through the woods and were now supporting the cannon, Robarte’s pike stopped as did Hampden’s musketeers behind them for a few moments allowing the cannon to either again fire ( and probably be overrun ) or to withdraw.  I rolled for their decision and they took the “save our butts” option.

We have had heard little from Lord Brooke’s commanded shot unit as it would continue to fail all of its activation rolls. Even when the Earl’s chair was passing by inches away, no orders were given.  Perhaps the officer was an Earl sympathizer?
However Ballard’s men were not so complacent about the battle ending quite yet.  And while Hampden’s pikemen congratulated themselves on the capture of the small cannon and Longe’s musketeers expended the last of their bullets with the bulk of the Earl’s army,  the grey clad musketeers charged at the sedan chair but narrowly missed capturing the Earl.  But with that the battle ended.
The Earl’s arrival to the Shire was not the easy affair he expected.

Footnote:
The officer of the Commanded Shot which did not perform well was cashiered from Lord Brooke’s employ for failing each and every activation roll.
He was found dead two days later of a self-inflicted gunshot to the back of the head.
Hopefully the commanded shot will have better dice in the next battle.

I was wondering which of these characteristics do I evoke in myself,  clipping away at the empty plastic figures sprue I was holding, to create small scale bricks for the time, in the indeterminate future, when I might want to make a destroyed building and mix them in with the accompanying rubble...... 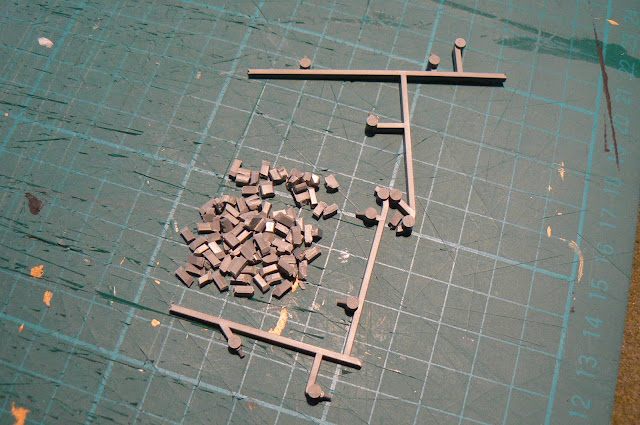 American General Jim needed to capture the important bridge near the Sheppard Farm to continue his advance into Upper Canada during the War of 1812 in this fictional affair.  The British commander Kevin was to hold this advance with his British and mostly Canadian contingent.  Both sides were populated with units of dubious quality militia.

Kevin, hearing that the rules were based upon the excellent “Loose Files, American Scramble” rules by Andy Callan, and knowing the strengths and weaknesses of the various qualities of the troops,  went for a ‘defence in depth’ strategy remencent of Greene’s deployments in the American Revolutionary War and so created lines of units with his best in reserve.


Jim meanwhile, in the attack, concentrated the Kentucky frontier militia on his left, while he lead his regulars, many of which were the usual poorly trained stuff of the American early war efforts, on the right of the large field which dominated the centre of the battle area.


The Kentucky militia perhaps evoking their constitutional rights to only defend the territory of the United States and not invade Canada, or were having internal debates or in-fighting, nevertheless refused to advance and indeed removed themselves from the action altogether before even engaging the enemy. (hard to get the militia to do much and Jim’s abundance of 1 rolls certainly did assist in their rapid dispersal!)


With that flank stalled, Jim continued his advance by units on his right until the final effort to take the hill before the bridge.  The US 16th Infantry Regiment lead the attack against the defending British 13th Foot.  While engaged in an equal battle for the hill, they were joined by additional forces from both sides.  The British barely came out the victors.   With that, the American effort was thwarted. 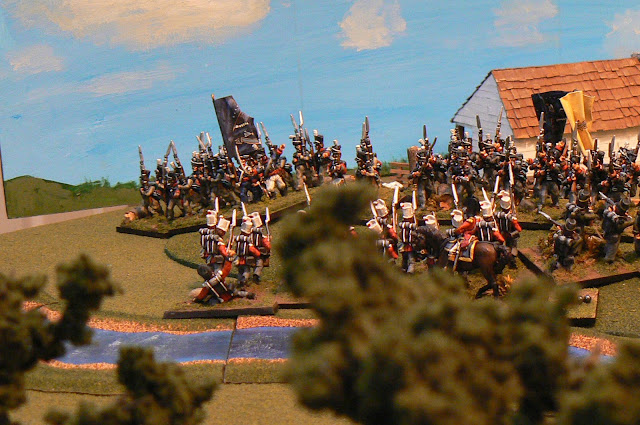 Excited by each of us increasing our GNW forces, KevinA’s Swedes, WillB’s Russians, and my Electorate Saxons, another battle at the club was scheduled.

In many ways it had a similar theme as our previous battle, having the Swedish elite cavalry exploit the woods on the left of the Russian/Saxon line to outflank and roll up the allies line.

The Russians on the right flank advanced without opposition hoping to attract attention from the Swedish in the centre but failed to do so, while the Russians of the centre were unwilling to abandon the defensive positions to attack to the left.   The battle concluded as the Saxons holding the left collapsed, but as the new Swedish Guards failed to advance further under artillery fire in their first time under fire in the field of battle after being proudly painted by Kevin, he was not able to attack the vacant middle of the Allies line allowing the Russian forces to escape intact.


A couple of wargaming buddies started their new c.1706 Great Northern War project and I finally could not resist joining in.  One of the few conflicts I have little knowledge, brief research had me going to collect forces of the Electorate of Saxony which allied itself with WillB’s Russians against KevinA’s Swedes.

Apparently not too confident about defending against the aggressive Swedes, it was common for these early 18th C Saxons to employ these spiky defences along their whole front.

While I have a few of these in metal, I felt I would need more.  Inspiration had me look at the used sprues of the cavalry and plastic toothpicks bought cheaply at the dollar store for a very inexpensive solution as the following photos illustrate.