Not a lot of wargaming of note lately for me.  Always piddling about on this project or that, but nothing write home blog about.

Did do up a couple of Waffenkammer resin tanks included for me in an order by WillB [link to company].  I added a late war T-34 to go against any German Kitties (Panthers or Tigers) others might have for a game of 'What a Tanker', or to be hunted by my German panzerfaust-armed lads.

The other, a rather smaller R-35 in Italian employ for support of my Italian Camicie Nere/ Blackshirt militia contingent.  A famous ‘charge’ of 12 of these caused consternation for the Americans at Gera in Sicily… for several minutes…..

This R-35 was inspired by the following images of the tanks engaged at Geta: 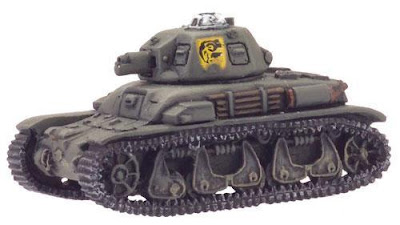