Vasili: I am cold.

Petr: Too frozen to take out the Fascists. We have these molotovs for them!

Vasili: Rather use to light a fire.

A long period of silence fell between them as the noise of a lone German tank became louder.

Petr: And not be a brave comrade of the Motherland?

Vasili just grunted “Time to die” as he arose from the snow and ran toward the tank.

Inside the tank, they were also cold.  Cold with fear.  The wind blowing snow, so blinding, had finally gone… but so had everything else; the others of his platoon, the infantry, the sky and all a grey bleer.   The commander was still hammering on the radio and yelling into the mike: “This is Reimer! Eins, Zwei, Zwei!  But no use; static only.  He hammered his fist on the useless radio for the final time.  “OK, Hans, turn aroun….Scheis! Russki!

The game of ‘What a Tanker’  using two Russian infantry with “Molotov Cocktails”  an incendiary weapon vs. a German PzIII.  With a couple of modifications, I am using anti-tank infantry much like one would play a tank in this game.

Tank: The commander’s yell halted them all, the tank did not move.

Vasili: Ran quickly despite the snow to a position where he could take careful aim on the tank.

Petr: Did not move but perhaps just imaged his heroic actions (rolling 5 of 6 command ‘Shoot’ Dice but of course he could do little with those)

Tank: Better composed now, the driver quickly reversed the tank but the commander nor gunner could seem to acquire the Russian.

Vasili: was now chasing the tank to get into range.

Petr: Finally could see (acquire) the retreating tank through the swirling snow and covered the space between his foxhole very quickly (now having rolled 4 ‘Move’ dice!)

Tank: The crew now completely composed, rolling a perfect 1,2,2,3,4,5.  The tank backed up further, acquired Petr (needing the extra ‘acquire’ [2] Dice to do so as Petr is a small infantry target), aimed the main gun, fired, and reloaded successfully.  The shot, however, missed Petr. The hull machine gun could not fire.

Vasili: Not having the distance to throw his incendiary, moved to the side hoping the tank would lose sight of him.

Petr: Moving nearer the tank, he lit the wick and threw.  The ball of fire struck the armour but did little else.  He reached into the deep pockets of his great for another bottle (‘Reload Dice’) and as he looked up, he did not have the time to light the wick (no ‘Aim’) and his last words may have been “Bugger” 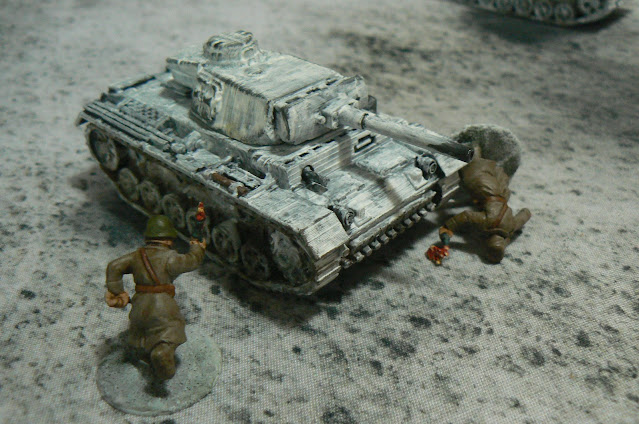 Tank:  The crew did not have a shot at the Russian but the one ‘move’ did the trick and the Russian fell under the tracks.

Vasili: Now ran up to the tank and threw his first Molotov and was already getting his second when the explosion warmed his face. The second one also hit. 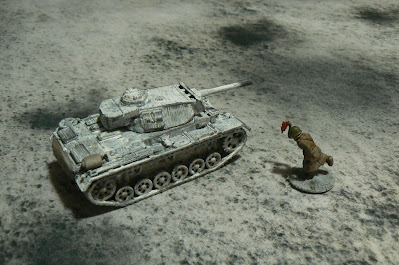 Tank:  The tank was on fire having lost 2/3rds of their “composure” (4 of the 6 command dice temporary lost)  but the driver managed to pivot in place to face the Russian.

Vasili: Not want to just stand in front of the tank and suffer Petr’s fate, could only follow the turning tank to keep to its side.

Tank:  Panic set in and it would do little.

Vasili: Lit the last bottle, threw it, and then ran.  The bottle fell short in the snow. But he had survived.  Yet so did the Germans.