It is June 18th and in tribute to the holiest of days for the Napoleonic fan [ ironically, as it the anniversary of the start of his final political defeat ] it is usual for the wargamer to show his Napoleon model or complete a re-game of the battle or some such.  However, I thought I would show some of the ‘unknowns” of the battle : the Dutch-Belgian Cavalry.


Now any casual Napoleonic military historian knows of the heroic charges of the French horsemen led by Ney to confront the Allied infantry in square; or the charge of the Scots Greys immortalized by a dramatic painting by Lady Butler. 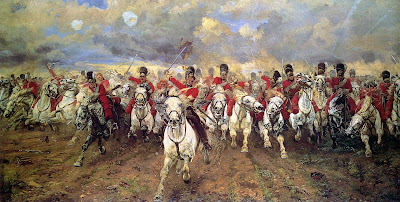 But, but, but there were a whole lotta other cavalry at the battle - or at least that is what the orders of battle show us.  What about them?  Well, for starters, the winners get to write the history as the saying goes and the Duke of Wellington, being the winner - OK, then, on the winning side - made damned sure the British were the winners. Oh sure, the Prussians many have helped but calling the battle “La Belle Alliance”as suggested by Blucher? Certainly not,  when a nice English sounding town name of Waterloo was only a few miles away.  However fully a quarter of his army was German, and he did not even mentioned the numbers of Dutch and Belgian soldiers he offered to the gristmill of combat.  It is to those unsung which I offer photos of their cavalry units I made from plastic.  [ mainly 28mm Perry, but some on Fireforge medieval horses and details from various components ]


The 3rd (Dutch) Carabineers were in Tripp’s Heavy Cavalry Brigade and while many illustrators have suggested they wore a rather impractical large bicorne headdress, Dutch historians suggest they might well have had the the elegant metallic helmet often shown with the more popular 2nd Regiment.

Next up are the 4th (Dutch) Light Dragoons of Ghigny’s Brigade
held in reserve at the start of the battle along the Brussels road.  Now, what did they do in the battle?  The British writers do not tell us. However they do offer that the nobel Englishman Earl of Uxbridge,  the overall cavalry commander - and given that role only the day before! - ordered some Dutch-Belgian units to follow him in a charge which they did not.  Thus the label of cowards were attached to all D-Bs.  But if a man you did not recognize, speaking an incomprehensible language suddenly arrived demanding you commit your life, would you immediately agree?!
Anyway,  they are a handsome lot and pretty on the table. 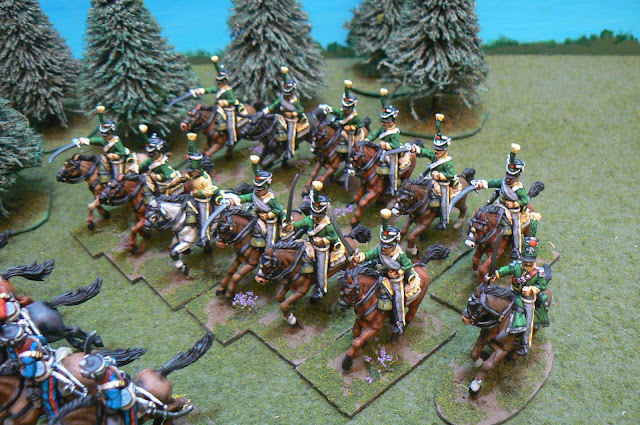 Lastly we have the 5th (Belgian) Light Dragoons who are recorded in combat at Quartre-Bras earlier in the campaign against the very similarly attired French 6th Chasseurs also in green and yellow. Reforming from that combat - or retiring or retreating or routing - all depending upon the narration given, were unfortunately fired upon by friendlies due to the uniform resemblance.  But we know they fought as did probably all the other Dutch-Belgian units and they certainly will in my future Waterloo tabletop battles.
Posted by DougH at 19:19 17 comments:
Labels: "Hussar Rampant", Dutch-Belgians, Napoleonics, Plastics, Uniforms, Waterloo HR

Monmouth's Rebellion of 1685 culminated in his defeat at Sedgemoor against James II Royal Army.  His all-civilian force had little chance against the Royal Army and so risked a night attack,  An early alarm had the Royal infantry formed up and ready.  While the determined Monmouth supporters made a good try of it, it was a fairly quick defeat historically.

With the alarm as the key, I had WillB as the Royal commander roll 1d6, 6 having alarm early so the Monmouth forces would have much distance to travel allowing the Royals to redeploy, move or await their cavalry and artillery support to arrive (these take much longer to form having saddles to harness and limbers to attach).  A roll of a 1 would mean very little warning was given and the rebels would be at the Bussex Rhyne (Rhine) a shallow dry irrigation ditch which was a pivotal terrain feature of the battle directly at the start.  Of course, WillB rolls his good dice and I start, as Monmouth, at a great distance to the Rhyne.

During this refight using a mash of Lion Rampant and The Pikeman's Lament, 'Rampanty' rules, the Rebels did make a show of it, perhaps a bit too much as both the Foot Guard and Dumbarton Regiments collapsed under the pressure of the Rebel onslaught, but to compensate for the very few figures I have for Monmouth's civilian forces, I upgraded them.  Their numbers would be added to only should any early units be eliminated so offering recycling (and given a new color of flag!)

One thing about any of the Rampant rules is the activation - or lack their of - for your units can offer much fodder for the narration of the battle.  Frustrated by the lack of action by the Royal Guard of Horse, I offered the explanation that obviously their colonel was still fluffing his wig and will present himself to lead the regiment once his damnable page would find the correct uniform!  It was another three turns before the correct uniform (read: roll of the dice) was found.
In another instance, WillB ordered "a shuffle to the left" by the Coldstream Guards.  "What the hell order is that?!" must have been the response by their officers as no move was made (another failed activation)


Speaking of dice rolling, both WillB and I seemed to make a lot of double 6 and double 1 rolls for activation early in the game both offering good and bad things to happen.  So many that we noted each time we would roll these results - 11 times in total!  [ for the record WillB at 5 double-sixes, 1 double-ones, myself at 3 double-sixes and 2 double-ones ] At one point early in the game a fully 1/3 of our rolls were one or the other of these results!  ....'usual' rolls are not our style....

These figures painted back in early 1990's have been patiently waiting for this game. I finally got a go at it.  My wife might now say I can again put them back in the boxes for another decade or so....
Posted by DougH at 22:37 11 comments:
Labels: 1690's, Jacobite, Pikeman's Lament

Awhile back I found a small group of Dixon US dismounted cavalry of the mid 19th century and decided to quickly do them up.  No, I don't have any opposition for them but that is a minor detail... 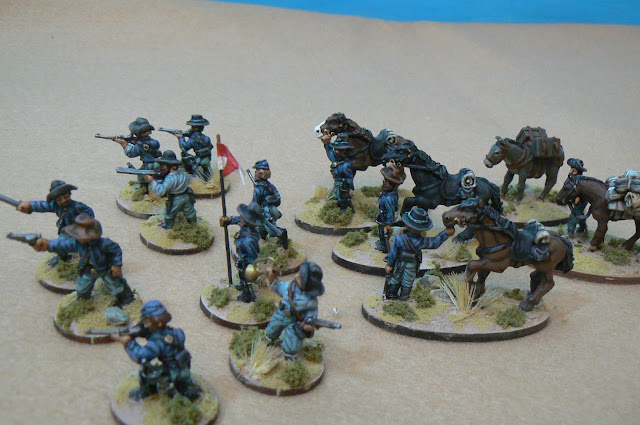 More recently a friend decided to open up his imaginary 1920's "East Indian" campaign i.e. that of the sub-continent of Asia, to those locals interested in playing (eventually).  As humour, I offered the following "historical" explanation to how a bunch of American c1870 horsemen became involved in a war fifty years and half a world away:

Regarding:  Transportation of United States Army Historical Reenactment Troop,  Fort Cheyenne circa 1876.
Destination:  Northwest Frontier Settlement Theme Park
Request:  Transportation of said troop plus horses, arms and ammunition, to mentioned location with all due haste for annual ‘Red Indian Days’ in June of this year.
———

“Sergeant, where is North West Frontier?” asked the two week old replacement;  he was confused upon reading the request.  The First Sergeant of the Military Allocation and Transport Department, already frustrated by the constant questioning by what he considered to be a halfwit - even by Army standards - did not even bother to look up from his reading of Gunga Din.  “Well it is in India, you idiot, in the North-West part, hence the name.”
“Got it! North West India.”
The sergeant, to his pleasure, heard a muttered muttering from the clerk,  “Oh yeah, that makes sense, ‘Indian Days’!

After many minutes of scribbling of orders the sergeant
engrossed in his Kipling book, had to respond to yet another question.
“ Sergeant that's a pretty big area on the map. Can you narrow it down for me?”
The sergeant replied,  “Try Jhamjar.”
“ ‘Jhamjar’, Sergent?”
“Jeez a’ ”, cursed the Sargent, “J…H…A……..”

Posted by DougH at 21:56 No comments:
Labels: Colonials, musings, the silly side

Based on the TFL "What a Tanker' armour rules,  WillB and I had a go at my "Beast vs. Shingle" game of the Merrimac verses the Monitor naval battle of 1862.

Designed to 'feel' like the historical battle i.e. lots of shots, not so much effect and with only a few 'critical' occurrences, the game certainly fills the bill, and can be a bit frustrating (no doubt also to the naval gunners of the battle) how our carefully aimed shot can bounce off the armour of your opponent with the frequency which is hair-pulling.  Fun stuff.  At one point Will rolled his defence dice and declared "Don't bother rolling, you can't hurt me..."  Yeah, fun stuff.  It takes patience and a slow whittling away at the enemy's strength.  The real battle lasted over four hours.

But in all fairness, karma did go both ways and the all-important 'critical hit' had his pilot house out of action and thus the Monitor was out of control for a period of time. Now of course it was moving slowly (and slowing each turn) but, by luck, drifted just out of line with all my guns (the Merrimac did/does have several blind spots) and I could do little as I was already dead in the water!  His turret still could turn and with a final, point blank shot did enough damage to have my worn out crew surrender their ship (no more command dice).


The making of the ships is described here: my previous post

A group of us rather distant wargaming friends - two countries, five cities, 500kms between - and this before COVID - have been working on an all-cavalry Napoleonic rules.  Up to this point as we were still developing these rules and as among friends we 'winged it' and did not get very picky about distances and angles and such; " yeah, close enough".  Thus we have had not the need of such devices.  However should we find the odd participant who might well force the issue, I decided we need to determine charge angles and directions so a template is required.  I finally thought about this and came up with this example:

(rather fuzzy photo to start things...)

Photo 1:  the template is the width of a full strength French Cuirassier unit with the angles at 45 degrees
Photo 2:  This shows the start of the player wheeling his unit to the right at the maximum 45 degrees for further movement. Each successive horsemen will be deploy beside.
Photo 3: shows the unit now fully deployed.  The distance is considered to be 6 inches thus far (...close enough) should any further forward movement be required. One inch can be subtracted from the distance moved for each figure less in the unit.
Photo 4:  the template now deployed in the front-center of the formation providing the check of the angle of movement allowed by the Cuirassiers to attack the British Light Dragoons in the background indicated by the left side of the white strip and continuing along the template.  Obviously move it to the other side for a left hand turn!

The templates are made from thin plastic sheets and I have made extras for all the lads (when we next meet..)

You might have noted the poor dead French infantryman on the template.  He is there merely for decoration!  I had a few left over from the Perry Dragoon Box.  I used the British ones as 'rough ground' for the game, so thought to be fair about it....
Posted by DougH at 20:58 No comments:
Labels: "Hussar Rampant", bases, Napoleonics, rules
Newer Posts Older Posts Home
Subscribe to: Posts (Atom)