In my third hosted game the critical part of the Battle of Waterloo was reenacted having Marshal Ney order much of the French cavalry unsupported over the crest line of the ridge only to find themselves unable to break the Allies infantry squares and be met with the one coming squadrons of Allied horse to force them away. 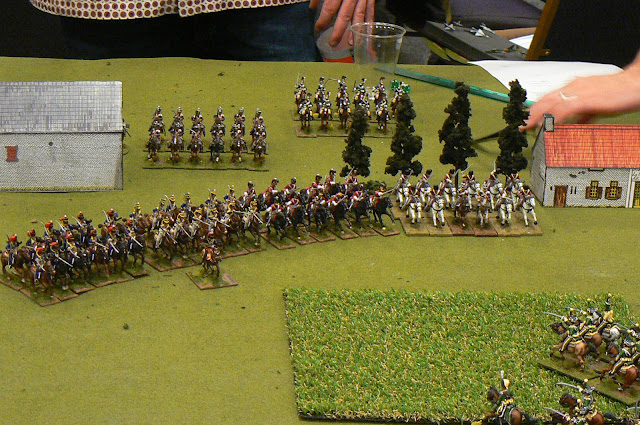 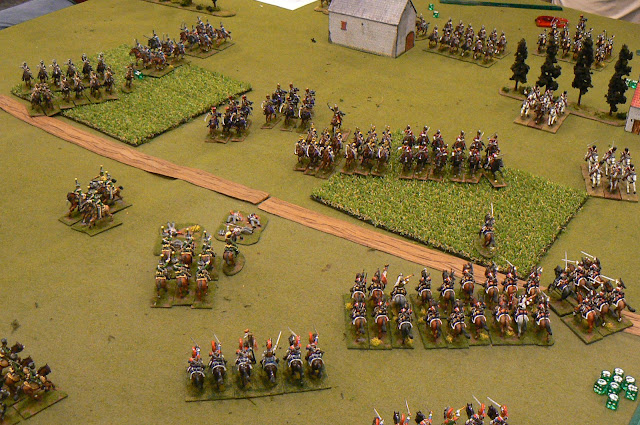 Preface:  one year ago at the 2018 convention....in one of our suites after-hours drinking beer... we decided that "it would be cool" to combine the Lion Rampant medieval rules to the showy uniforms and dash of the Napoleonic era into a fun ruleset.  I was tasked with making it happen.  After many trials, some of which have been previously documented in this blog, the rules seem to have operated well especially after having undergone a major trial of a convention setting, having 14 players move around 28 units ..and my voice virtually at a whisper from speaking in the din for the entire day.  Nevertheless, it seemed to go along well for all the players many of which painted up their favourite Waterloo units specifically for this game.

I cannot describe much/any of the action as I was involved clarifying to the many players the charging procedures (a bit tricky at first but with experience players seemed to have them understood) but I wanted interesting action and not your standard "you set up there and they set up opposite" deployment.  So I had each side dice for their position in a random method: French from the south and west, the Allies from north and east. THAT produced some interesting angles!  I also used random bases of casualty figures as "terrain pieces" to provide delays in movement and charging (horses don't like treading on dead things and so will cause problems for the riders!) 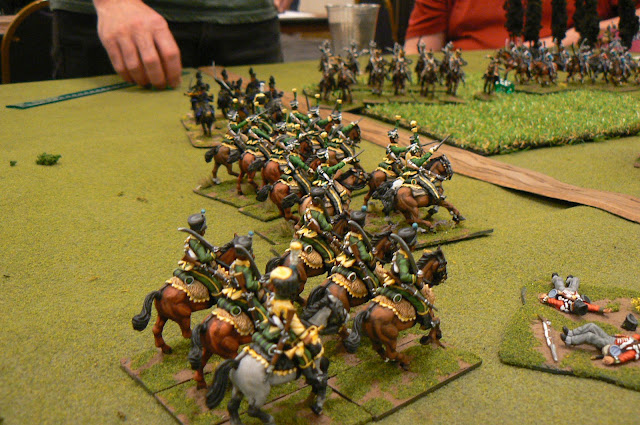 This Napoleonic battle of 1813, was the second largest of the wars.  Our developing ‘big-battle’ rules is specifically designed to play these massive affairs but even these are challenged by the size.  However, the Allied command conveniently did not utilize large portions of their numbers and to fit it comfortably into a single game session with a convention table restriction and time restraints, I reduced the element numbers by some third. 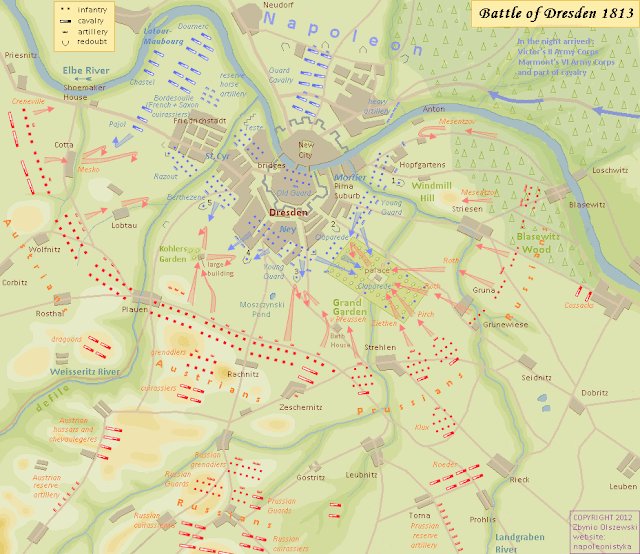 As with the dedicated group enjoying these rules, the players each painted up their own command with a common basing which really helps with the look of the game increasing its ‘visual continuity’.  We had DaveB with his commands of Mortier (the French Imperial Guard foot) and Ney (the Young Guard), St. Cyr by James, all the Austrians done and commanded by Seth and the remainder filled in by myself.

As I gave myself the “adjudicator” task, I was not intimate with all the actions of the game, moving from one small judgement situation to the next, but the game kinda followed history compressing the two days into one.  In the game, as on Day One, the Allies attacked in the middle forcing the French back to the artillery emplacements before the city. However, the French sprang back, in this case with good artillery support as per Day Two of the historic affair.  On the French right flank, BobE commanding most of the French cavalry with infantry outnumbered the Austrians who were separated from the rest of their army by a rain-swollen river crossable at only one point at Plausen.  Historically the Austrians were severely defeated in this area…as were the Austrian elements on the tabletop…


On the French left flank, DaveB, used the advantage of the French Guard elements to push back the Russians under Ian and Prussians under BobS to their breaking point.
See DaveB's blog post and his activities during the game/battle at: link with a very well written account.
We ended the game without the need to have the obvious happen having those commands inevitably rout off the board so ending with the situation very close to the historical battle.

Retreat from Moscow - at Enfilade!


The first of my three games I hosted at the Enfilade! convention in Olympia, Washington State USA, was a “Retreat from Moscow” affair conceived after learning the convention’s ‘winter’ theme, the fortuitous acquisition of the beautiful Perry sculpts, the ownership of a large white sheet which could be a tract of snow covered tabletop, and the re-conceiving of the church which I previously constructed but with which I was not entirely happy so I was quite willing to cover it modelled snow - all the parts of which a miniatures game may be made; except for the lack of the rules. 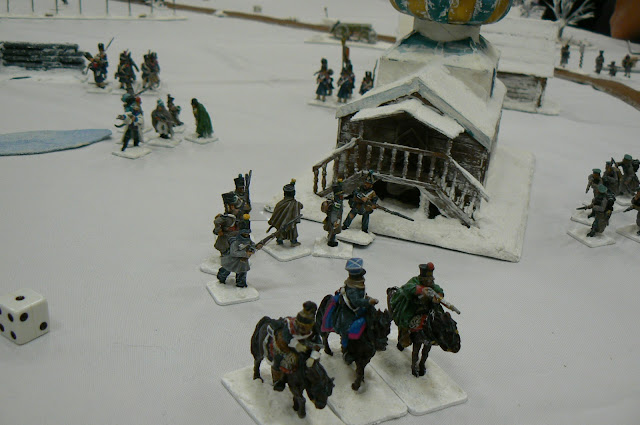 I am a firm believer that all convention games, with the accompanying noise level, player inexperience, and general confusion, must be of a simplistic level to work and be fun to play.  So I made these really simple!  If the participants are not playing the game unaided by the fourth turn, the rules are too challenging!  Generally 6s to hit, movement by standard stick, shooting range by the same, blob movement, no formations and above all, no morale.  “Morale”, the mental state of which our metal miniature representative conduct human emotional responses to combat situations on the tabletop can be the bane of rule writers and players alike…so I just said there are none. Units will continue until no figures remain.  None got to that stage in this game….some were close however!
As my game write up suggests, “ To surrender is to be killed, to give up is to die frozen, to run away is to die alone in the white vastness. Your only option is to fight and keep walking but that the Russians and nature may not allow.  It's fun in the snow!!  Simple rules for a simple game!”

I had 7 players controlling their small units of either 6 foot or 3 horse of the retreating Grand Armee including Poles, Bavarians, French and a group of various other nations (for which the Perrys made) verses the Russian defenders of jagers and Cossacks but mainly small groups of armed peasants. 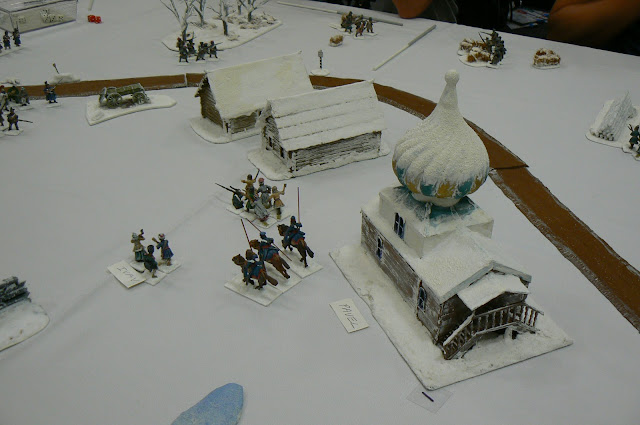 All the aspects of the game are random, including the use of hidden cards indicating who next chooses his - or her - unit.  I had the two players who picked the jagers or Cossacks also move and roll for the peasants on their side of the table to speed up play.    The game flowed along with all the French players making it across the rather rickety bridge (a chance for figures falling to their deaths in the frozen river ) and “victory” in safety off the table. 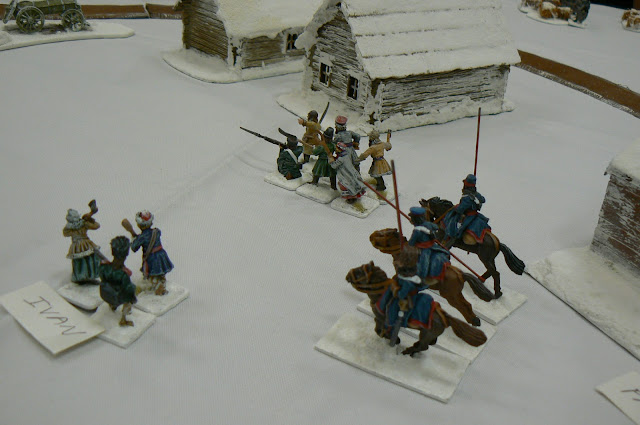 At first, most players were under the belief that it would be a very difficult task, as I suggested even by crossing some of the terrain could kill them; but, by the end of the game, they were suggesting for more dangerous approaches for the Retreaters!  As with randomness, sometimes the aspects were not that dangerous with the dice rolls; my favourite, the wild boars, proved rather ineffective on both occasions (!) and being shot with good musket fire so not having the chance to get their teeth into either French or Russian flesh. 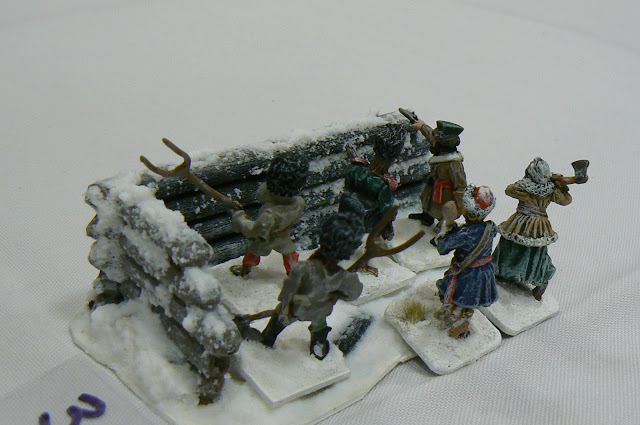 I was a bit surprised being judged best of session theme winner, and handed out the swag I was presented - small flashlight measure, tape/bottle-opener combo etc. -  to the players first over the bridge as a bit of a reward for their play.

The French needed to get the wagons pack and moving. They also needed the squadrons active to counter the Allies horse attacking them.  They could not do both at the same time.

….However, both Allies players (myself and ChrisP) failed our first activations even though Chris had accurately predicted his starting position (closer to the bridge to the French’s rear but harder the roll to do so but of which he was successful)  Because of the wagons/non-activation problem for the French, I gave them quite the points advantage which they used the numbers and tough cuirassiers to counter each of our attacks.
Though much of the discussion of the rules could be clarified if I could remember them (!) or remember to look them up (!) I guess they survived.  But combat over the wooden bridge was controversial to such a point that I exclaimed, “Note to self - no more bridges in scenarios!!”

You may note in the photos the use of a new version of our “blown” marker - a discarded hussar’s pelisse in light blue with some of the units during the game.  With the number of Perry plastic hussar boxes I have used in the past while, I have a lot of them left over which I decided to put to good use.  These can be used in conjunction with our normal ‘horse-head’ markers. Any marker would do, but these have a nice aesthetic look.

Humorous event from the game:  poor JimF was lamenting about the lances he manages to knock off his metal figures each game.  Well, surprisingly he did not knock off a single lance this affair - it was instead the eagle standard off the cuirassiers to much amusement of the other players.