It is horrible how the Holiday season can interrupt routines.  But nevertheless it can allow for some good quality painting time so I have created a few additions to my now completely insane Napoleonics project.  As usual it has expanded beyond my originally sizable limits to now doing the whole Hundred Days campaign, albeit at a 1 element to 2,000 infantrymen ratio.  Still nuts though.

Some of the units so far are noted below.
Some of the cavalry will be in metal, some in plastic depending upon availability for the most part.  And while the Perrys do create the required types, I will mix and match parts and do much modelling to create what I can in plastic for mainly the weight issue.
Most of the artillery will be, by necessity metal as only Victrix with their British Artillery box set, has created any in plastic.  The Perrys are good, well posed with each figure 'playing' its part.  For example the gun-layer of the above set of French Line Horse Artillery is so matched to the gun model that for gluing down the figure, the gun model did not require any glue to fully secure it to the base! 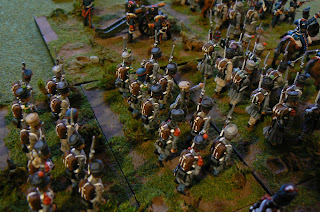 The infantry are again plastics and are in marching pose for the most part which is fine with me.  Most will be this way as can be seen in the above photo of the over-coated French masses.  The Perry versions are the unit to the right, while the two following units are Essex.  These I picked up from a sale very inexpensively but some of which were from the Revolutionary era; so it was off with their heads to be replaced with spare Perry heads.  They are a tad smaller than the more modern sculpts but this is not noticeable from above and so added another four elements to the French.

While most are in march pose, the Victrix Guard boxes had a couple of poses which were not 'moving' and so were destined to be in the 'firing line'.   With these I created two elements of the Young Guard Tirailleurs.
This first one I added a spare limber (Prussian) to add some space and drama to the vignette (and I was a couple guys short!). 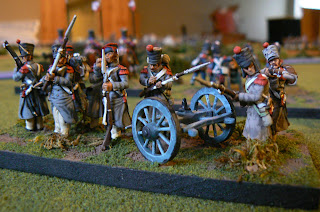 While I would love to take credit and say I conceived of the action and glued the arms, made adjustments and sculpted them; I merely grabbed arms out of the trays and glued them on to the torso in almost random fashion.  Only after painting did I then take the time to position each according to what they appeared to be doing.  For example the figure in the middle behind the limber appears to be adjusting the firing lock on his musket (or some such).  Have no idea what the original arm positions were intended but I only made sure a right arm was on a right side of the body. Funny how the positions kinda make sense in context.


This is especially evident in the next photo of the second element as the you can almost hear the dialog of the middle two front figures.
"Mon deu, why does the musket not fire?!"
"I think your firing spring is broken.
"Where?"
"That thing there" 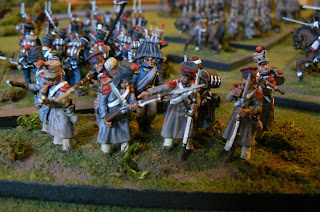 Trust me, while painting them I was wondering how the pointing guy was ever going to look good individually but together with that other mal-aligned pose, they seem to pull it off.
Mind you marching poses are way quicker to glue together and quicker to paint!  They better be...I have boxes of the buggers to do......

OK, here is one of those stories, dare I say typical (?) of the wargamer and his hobby.

For the new Napoleonics project,  units are on solid, one piece bases.  But Napoleonics are all about the 'square' formation, is it not?
Before this era, the SYW or AWI for example, do we have units going into square to beat off cavalry?  Nope.
After? in the Franco-Prussian War say. No again.

Even if the stand represents many individual units (the stand ratio 1 : 1,000 to 2,000 men). Tactics would suggest the square as a tactical option be available to the player. Rather than painting up an extra 100 or so miniatures for elements to be placed in pretty square shaped vignettes ( as nice as that would look!) is the need to have a marker to give the visual reminder to all the players that the unit may indeed get a modifier or some such.

Sooo, I need a marker.  And not some lame cardboard chit or colored fluff ball. Yuck.   With that in the back of my mind, I looked around the local dollar store and discovered blocks of wood.  Squares for, ahh, squares!

While quite large for the table at 5/8" or 15mm a side, I sought to minimize their obtrusive effect by painting them black and terrain the top side.  The effect can be make from the photo, whether it has been achieved.  Hopefully visible and yet not.

Reading the narratives of Napoleonic campaigns, one is struck by the endurance of the soldiers.  Sleeping what can only be a fitful sleep on soddened ground with only a dirty coat as warmth, with little or no food in the belly, only to woken before dawn to march another long march burdened by musket, pack and equipment.  Then to be thrown into a maelstrom of cannon and fire and slashing swords; of immediate death and panic, only to survive to see the horribly wounded and dying.  Yet to march off again wet and tired to fight the next day and go through the horror once again.
As I muse these thoughts to my wife early this Wednesday workday morning, her only comment:
"So it's like 9 to 5...."