The famous Zouave military unit of the French Army started as a tribal enemy to the French occupation of modern-day Algeria in 1832 but within only a couple of years they were recruited. Its original commander designed the distinctive uniform based upon the tribal dress which, interestingly, did not much alter for another 150 or so years.  The ethnic makeup of the unit soon became all French in nature, but the uniform remained quite standard.  I am showing the earlier dress which included the green turban for the 2nd battalion.  The 1st wore a red turban; while later years had the turban in the well-known white as this had less a Muslim connotation.  The leggings are portrayed differently by various illustrators, but I went with black as this is a bit different than the usual brown leather look.  I am using the Perry ACW plastic versions which are modelled after the famous American 5th New York Volunteers who, in turn, modelled their uniform very closely to the French version.  Thus I only needed to modify the round American canteen into the black leather water carrier of the French (albeit of a slightly later era to be honest) and remove all the oval Union Army buckle badges. A common trait of the French of the era was to cover the ammunition pouch with a linen which I mimicked to give them that much more not-the-American-version look!

Here they are somewhere in North Africa with a French occupied village in the background. 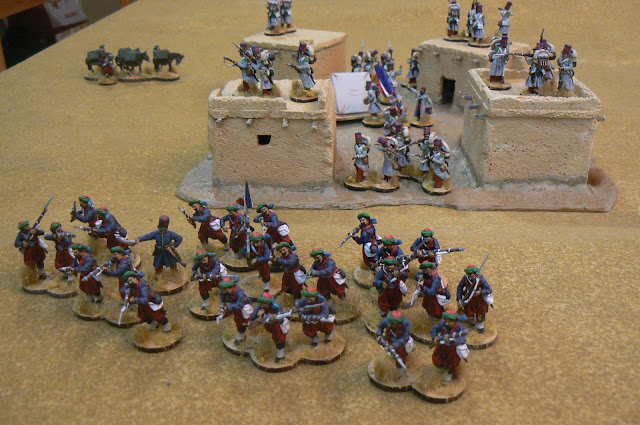 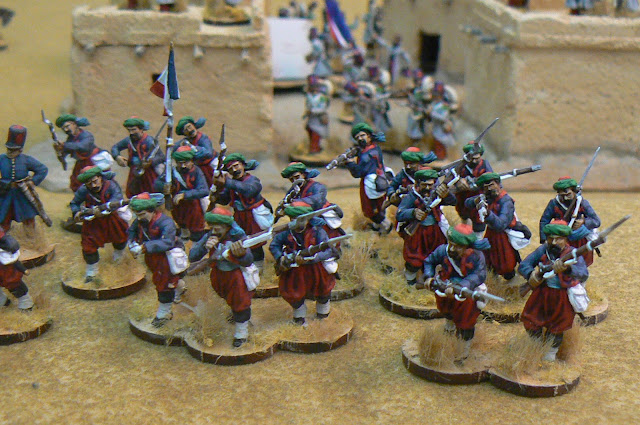 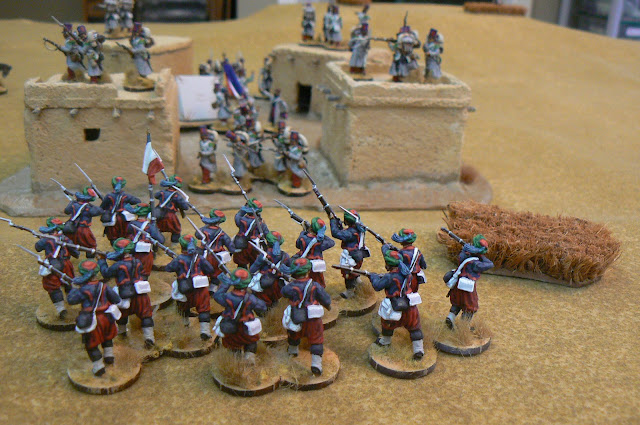 While the famous American conflicts against the native populations of the ‘West” were almost over by the time of this battle, Canadian expansion into the Prairies was continuing apace.  In the area of Saskatchewan, the indigenous Cree and Metis ( a mixed race and culture of farmers and hunters of French-Canadian and Native inhabitants ) were feeling the pressure on an ever increasing eastern homesteader possession; with Louis Riel the ‘spiritual’ leader of this very autonomous people. History has called this conflict ‘the Northwest Rebellion’.

While a few other major skirmishes had occurred, it was at the village of Batoche in modern-day Saskatchewan, Canada that the decisive battle to end their resistance to this pressure was backed by the military of the Canadian government which rested upon militia units from the eastern provinces.  These units made up of civilians were certainly enthusiastic enough but inexperienced.  The few Metis were often good shots and very experienced in ‘field craft’ but ill-supplied.

What is interesting about this whole affair is the decisive battle was a prolonged four-day affair with only some 24 dead and 76 wounded total from both sides from the 1,166 engaged (Wikipedia). With my calculator at the ready, this is only just over 8% casualties over a lengthy 4 days. With an eight hour ‘work day’, this would have on average 1 casualty every 20 minutes or so.    No Somme, Cannae, Shiloh, or Little Big Horn here.  But with that, most rulesets have great clumps of miniatures removed from firing and combat.  Obviously this will not do.  However my new, go-to rule set of “The Men Who Would Be Kings” (a colonial set by Osprey Publishing) could be modified to accommodate the lack of casualties but still have units pinned, unable to effectively operate and have ‘morale’ issues to prevent much activity.  One other aspect of the battle was the ever decreasing ammuntion supply of the Metis.  They simply did not have the supplies needed.  Their fire had so decreased by the fourth day, along with the withdrawal of many who had given up the fight, that the Canadian soldiers frustrated by their commanders slow activity took it upon themselves to charge the Metis rifle-pits thus ending any further Metis resistance. 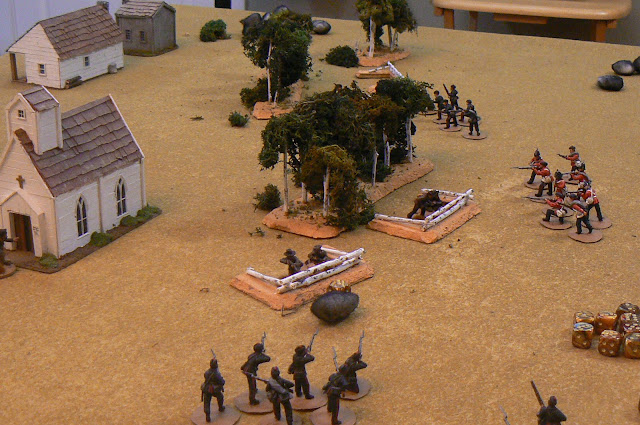 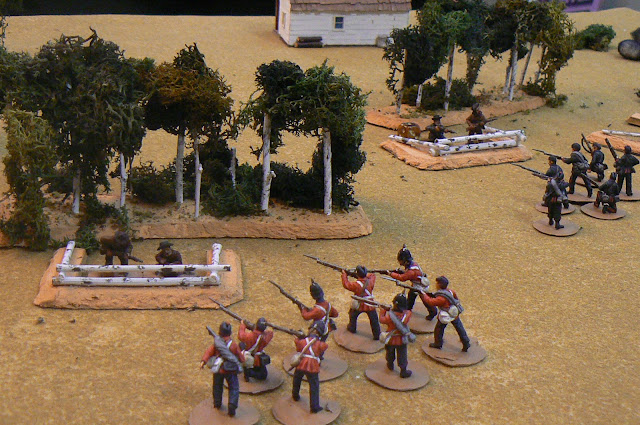 The 'TMWWBK' rules are adequate but for two small changes.  First, any casualties would be limited to one per successful firing regardless of the actual number of hits. Pinning, not casualties, would be the important issue.  Secondly the Metis would set up in the rifle-pits designated as ‘hard cover’ and combined with their good-shooter ability and the Canadian militia poor firing, will have the unequal shooting which occurred.  However, the Metis ever decreasing ammunition supply would be handled by giving them a secret die roll (from the Canadian player) how many shots they would be allowed. I gave a 1d6 roll per rifle-pit;  but each day would see that amount decreased by one. Thus at best the Metis would have only 50% firing minus any further casualties or abandonments in the final phase of the game.   The Canadian player might see less fire power but would be unsure of the amount remaining thus continue with caution which was the trademark of the engagement.

A “day” ( the historic battle lasting four days) would be 8 turns in length.  The Canadian player must have overcome all resistance to win.  If at the end of each ‘day’ (the 8 turns) and the terms of victory not met, the ‘day’ is over and the action pauses.  Immediately in the ‘morning’ the players can reposition their units with their morale afresh  (minus previous casualties of course ) in any new attack position along the start line for the Canadians or any available rifle-pit for the Metis.

The TMWWBK rules are interesting as activation and morale are key aspects but can be very dice fickle.  The resultant lack of action and easily gained pinning effects are perfect for re-creating this battle. The photos are from my second solo play-test.

The Canadian Militia, whose dress was very much influenced/copied that of the British home country, were in either contemporary rifle-green or red tunics.  As far as I know, the only source for miniatures are 1980s RAFM miniatures.  These are small “true 25mm” very stiff in posture and lacking multiple poses.  Thus I needed to create my own and used Perry Union ACW plastics. While not completely accurate, they do look the part and I needed to only to remove the oval badges and green-stuff the glengarry caps or, in some cases, add a Perry ‘Home Service’ helmet head.  (indeed some units wore these! )…. oh, and a different paint scheme, of course.  Much of the militia had no other uniform for campaign but their full dress version.

Way back, I started this blog with posts on the War of 1812 as that was my current interest at the time. As followers of this blog know, I am interested in the military history and the modelling of MANY different periods and subjects.  Well, I finally sought to bring out the old War of 1812 units and randomly picked two from storage.

Can you name the two British units with their unique flags?  You can place your guesses/confirmations in the comment sections.  Bonus points to disclose what these two units have in common within the British army of c.1814, the year of their involvements.

Ancients down to the bone

The painting was simplified by the use of ‘bone’ coloured primer so only required a wash of Army Painter Soft Tone to give them definition. Muted colours and rust or patina on the metal bits provide the “been in the ground for a while” look. Note the two legionaries emerging in the foreground of the photo.

Hard plastics, in this case those from Wargames Atlantic, provide a great medium on which to glue the extra bits of helmets and shields which are offered as optional extras on the more fleshed out sprues of the historical models by the other plastic manufacturers.

This “campaign” started when Craig and PeterM played in my WW1 Middle East game using the soft plastic 1:72 scale figures I had painted a few years ago (almost an only one colour and a quick stain job).  Haven’t even done anything with the bases and only painted them a ‘desert’ colour.  The trenches are just self-hardening clay with a quick 'sand-bag' pattern scrawled into it. The terrain is very simple, usually only a piece of felt placed on the tan-coloured wool blanket.  Not very attractive to be honest     ( or at very most 'old-school' ) but the boys had so much fun that we have turned this into a regular meet playing out games using a selected roster of troops …this mostly determined upon how many and of what type I have had painted for each side!

After each game, we spend a delightful time (for us) analyzing the numbers and changing the rules for the next game.  The rules are the fantasy set “Dragon Rampant” for the stats of each unit employing the basic mechanics which satisfy our needs well.
Posted by DougH at 11:24 2 comments:
Labels: "Sinai 1918 Campaign", 20mm

Lord of the Rings 'urban' game 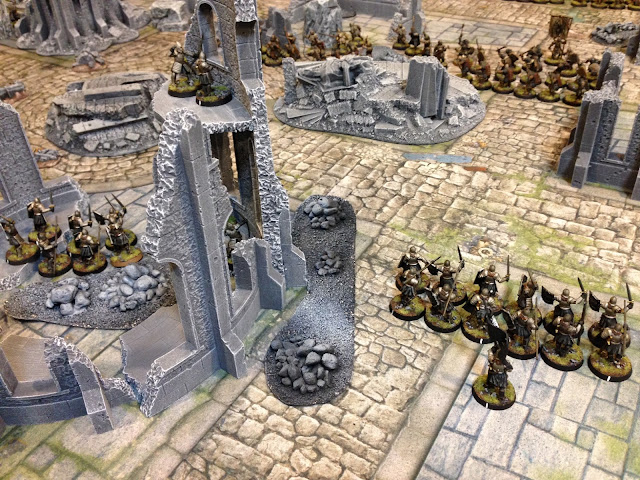 It is simply from osmosis that I have any knowledge of the Tolkien worlds as I have never read any of the Hobbit or Lord of the Rings books.  Nor have I watched any of the movies except some random battle scenes so CGI’d and of such ridiculous tactical maneuvers that I could only go ‘pfft’.  This puts me much apart from one of the gaming groups I venture with.  They can happily ramble on about all the details.  When I dare to comment that they could use different colours to paint differently than what either GW or Peter Jackson have envisioned, I am met with such derision I might have said the British Army never wore red in the entirety of its existence! Such is their history of this fantasy world.

Yet I can play in LotR games. Don’t particularly like the rules, but an armoured guy with a spear is basically the same whether Orc, Gondorian or even a Medieval Yeoman for all that.

In this, once again with a “go and kill” scenario idea ….sigh ….I was one of the “good guys” against the bad guys.  It was ‘the army loses at 50%’ victory idea with both sides close to that at the end of evening.  However it was a nice looking and, for this fantasy world, a different urban environment set up by ChrisO.

The figures and terrain are theirs (a collaborative effort). 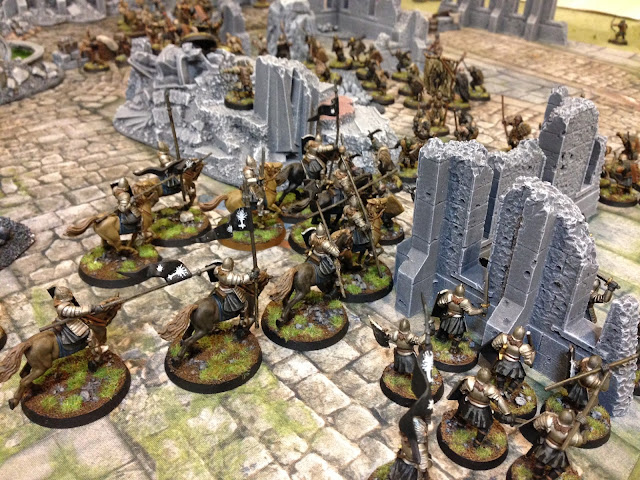 With the club once again opening up for participation, decided to take my Samurai with some basic terrain.  I laid out the terrain in a haphazard method, placed troops on the table only in their clan grouping without any respect to tactical positions, and said to the players your troops start in those positions and gave the terrain descriptions ( this and that are rough ground, etc. )  Quickly looking around the table, I then gave them the briefest of objectives ( which turned out to all converge upon the village centre as I soon discovered ) and had them to it.   So much for careful scenario design, eh? Still better than the 'kill the other guy' routine.

Pictures from the game: 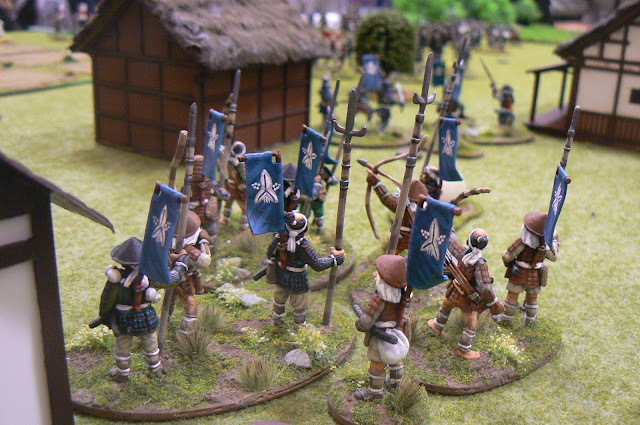 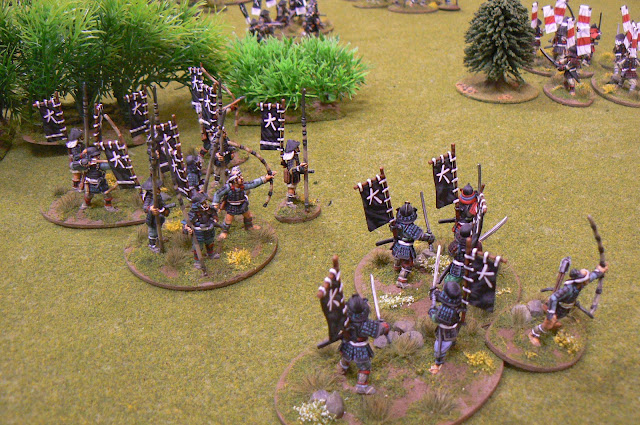