The great debates in wargaming (well, among the many...) is the problem of scale.    It is not the 15mm vs 28mm debate and which is the 'true' version, or even that 28mm is a measurement and not an indication of scale argument, but the vertical vs horizontal debate.
We have a miniature representing X number of troops. Fine. But how large an area does this number of troops occupy on the battlefield we are trying to respresent?  If the battlefield is X yards to the centimeter (or to the inch if you want) then how many miniatures can occupy that space?  If a to-the-miniatures 'scale' building is added, how large an area does it occupy?  3 or 4 hectares? Many acres? Huh?!  If a very nice two story historic farm building with the appropriate scaled doors so a 28mm figure could enter, would have of the horizontal footprint of the Airbus factory how is that on our tabletop vis-a-vis our field scale?

So how does one work around this?  Most wargamers downsize the models; use 15mm buildings for 28mm games. Some make them correct size vertically but severely shortened horizontally so the buildings are very tall but extremely thin.


OK for single buildings but whole villages?  I went the way of many, and went with the single building approach on a somewhat larger base.  This should work even if one of our elements (the size of which you can see in the pieces of wood in the photo below) 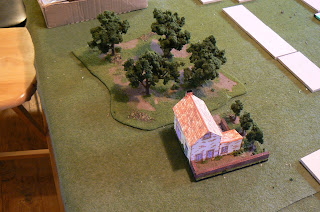 I guess I am thinking in the future with my age and all I will be unable to lug around the 40 kilos of lead and terrain like I have done in the past, so again for the weight consideration, I have made the 'villages' from some old card building prints I had stocked away (I have no idea when or how I acquired these but I suspect from my mother-in-law...) I had copies made varying the tint each print so each would look somewhat different.
Anyway the price was right at only a dollar a building and with a bit of paint touch up to eliminate the card stock white edges and darken the chimneys and such; and with the ground work and shrubbery attached to the lightweight foamcore base, they should do the part until something better comes along.

I'll start this rather tardy post with the conversions I made to create elements of French line cavalry.  I am in the process of 'mixing and matching' creating the different French cavalry formations which, while readily available in metal, are...well...metal and thus heavy.  I like the plastic sculpts and transporting is lighter. 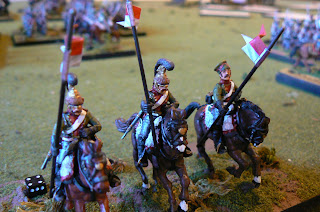 My Line Lanciers (above photo) are hussar horses, dragoon bodies, dragoon helmets with carabinier crests attached and dismounted dragoon arms with the carbine removed and lance added. This dragoon model has the heavy gloves close in the body which would be difficult to remove as well as its heavy boots, but illustrations I have seen (also noted in the Osprey book of the topic) has found them with such apparel and blackened. 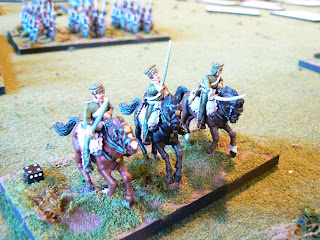 My Chasseurs a Cheval (French light horse) are hussar horses, dragoon trumpeter torsos (minus the lace which I scraped off), hussar legs and infantry forage caps! 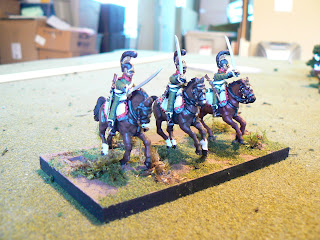 The above unit is rather unique.  With the quick transition from the Restoration back to the rule of Napoleon, many units took the expedient route and quickly removed any royalist markings. The 1st Chasseurs, being the first and given the Roi title were given special helmets by the King.  While they removed the "RO" they apparently left the I (the 1st) and did not change this headgear which they used in the 100 days (Waterloo) Campaign.
My unit is again scraped off lace work of the trumpeter upper torso (the Perrys thoughtfully offered two upper torsos) attached to hussar legs and given Carabiniers helmets with a different paint job.

My units are only three strong (elements) so not much work and fun to do.

Been awhile as I have been very busy painting and if not that, conducting normal life.  Boring stuff like grocery shopping, work, exercise, etc.

However, as my friends point out, I am a hard core wargamer.  So I spend more time than what might be considered mentally healthy, thinking about my hobby. One such aspect is the ever growing 100 Days Napoleonic campaign of 1815 (aka Waterloo).  It has sprung from a drunken discussion for doing Leipzig in a big way, to doing a more moderate 1813 battle (Hanau) with my friend Seth, to doing a later battle in 1814 with a very similar OOB (Montmirail) for myself, to doing a even later larger campaign (Waterloo).
The jump of logic to Waterloo should be explained.  Montmirail had both Prussians and many more Russians fighting Napoleon but I had way over-bought Prussians for the ratio I was working with (I get so excited with good sale prices. Sigh)  that I needed to find another battle to work towards with many more Prussians in it. Yes, I could have sold the extras but were is the fun in that?
Well, the Waterloo campaign which I have always been into since I started the hobby as one of my first wargame books was on the subject and on finding an old AH small boardgame with the formation chits matching perfectly with my unit ratios, that I now have switched gears toward this new project. And it is a biggie!

But calculation was very much need as I did not want to over-buy once again and so took the time to get the units proportioned out just right.
I have now assigned each formation the specific units to be painted.  I started with even a tighter ratio but reality kicked in (!!) and I reduced my element numbers, with a combined arms totals, to approximately 2,500 troops per element

The French will have 49 total elements, the Allied Army 35, and the Prussians 46.  As a quarter of the elements are horse at only 3 figures per element and infantry at only 8 to 12 per, and artillery at only 1 model, each unit is not that many to paint. Keep chanting that, I say to myself...
I have always loved the period and the campaign, it has lots of inspiration, and with a high figure ratio, I get to pick a choose which units out of a division I would like to paint, for me it has a lot going for it...except my over-doing it of course!

Thus my musings to add to the other hundreds of other wargamers doing the same campaign/battles/scenarios for Waterloo and the 100 Days Campaign. Crazy loves company....

Painting, but nothing to show

I have been painting alot these days, but really nothing to show.  Unfortunately I am having "technical" difficulties uploading photos and have not had the time to get a new 'uploader' thingy.  (yes I am a technophobe!) I believe this is the problem but I ain't no expert....

I am still going strong in my wargaming preparing for a large Napoleonic game at the local convention on the first weekend in April. Very stoked about this and thus purchasing and prepping (gluing mostly plastics) like a madman. (usual condition by the way!)  However I have a few friends who are also looking for me to get some figures painted for them and so I have been extremely busy with all this lately.

Thus essentially nothing to comment on.  Sorry but there it is.