A fictional game of the War of 1812:
(please note the 'fictional' part! So no complaining you can't find it on Wikipedia...)

"Who the blazes is knocking on the bloody door!"
"Me Lord", his adjutant replies, "the Yankees are attacking"
"Yes, yes.  Let me get my trousers up"
Somewhat later, the Major explains that the 19th Light Dragoons(1) posted to the west of the town had fought the advanced party of Kentucky mounted rifles leading a large force from that state.  The small contingent of the British cavalry had done a good job of holding up the Americans while alerting the camp of the attack.
"Well, tell the 49th to move with all haste and have the Swiss regiments(2) follow shortly.  Oh and send someone to tell the Glengarries (3) to keep lively but stay on the hill. They will guard the left flank. "

And so starts the grand novel I will duly write about this 'pivotal' battle of the war....or not....

If you really must know the AAR about this solo battle I conducted with a homebrew rules, themselves a knock-off and combination of Andy Callan's "Loose Files and American Scramble" and Paul Koch's command rules [both published in wargame magazines in the early 1990's]; then I will give you a brief history.

The units I choose were simply those in the top boxes at the time.  My 49th Foot I have a special affinity for as in the actual historical battle of Crysler's Farm, they wore their overcoats.  Now every manufacturer seems to love to create French Napoleonics in overcoats but British?! Nope. Thus I took my limited 'green stuff' modeling skills and, using the standard Old Glory British advancing pose, having removed the roll on the pack, I proceeded to wrap the putty around the figure. I first did the cape and later the cloak and finally enlarging the cuffs but leaving the arm intact.  Surprisingly, it went very well. I now have a unique unit no other wargamer has, at least in that exact detail anyway.


Oops I digress.
Back to the battle.
The veteran 49th quickly moved and formed line to face the masses of Kentucky militia moving, albeit in slow confusion, towards them. The British regiment of Swiss origin, DeWatteville, moved into position to their left and together started volley fire into the milling regiments of the American militia who quickly melted away.
And yes the Glengarries had a big shoot out with the advancing US 28th Infantry Regiment (recruited in Kentucky, by the way - so this was an all Kentucky affair!) For three successive turns, these two units rolled dice and modifiers the same, thus producing much carnage and resulting in the survivors of both sides backing away.  However, the American/Kentucky grand attack was stopped and the British veterans commanded the field.
Footnotes:
(1) the 19th was the only British regular cavalry unit assigned to Canada during the war and was used for scouting and courier duties for the main part.  The only recorded charge was by one small squadron during the Niagara campaign of 1814. It was beaten back by a company of American regulars.  No 3,000 strong heavy cavalry charges in this war!
(2)  There were two 'Swiss' units of British infantry in the war. The DeWatteville fought in the Niagara area, while the deMeuron Regt. joined the Plattsburgh force.  I like them 'cause of their cool flags!
(3) the Glengarries were a well-trained unit of Canadian Fencibles who wore British 95th Rifles uniforms but armed with muskets. 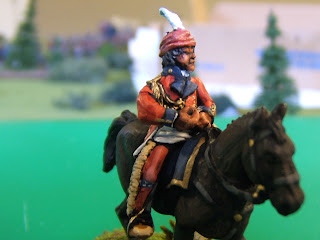 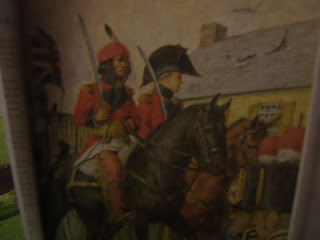 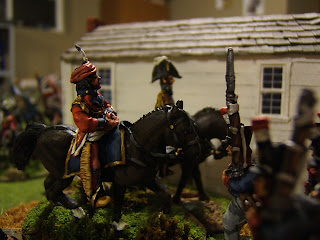 I am big into the War of 1812.  It has all the color of Napoleonics but without all the cavalry and the French!  Well, OK, it is not Napoleonics, Not the tactics, certainly not the big battles and the cuirassier charges.  However, one can have big battalions as there were very few of them and Native woodland Indians if you so choose.  Commanding the Natives was the big motivator himself, Tecumseh. The 'Saviour of Canada' General Brock gave him the rank of Brigadier-General and apparently he wore that uniform (at least once, anyway)

first of the musings

Well, I have finally joined the masses and created a blog. However this one may be only for me; to perhaps explain to myself this hobby of mine.  My obsession. To many people I know, they would little suspect.  "He never mentioned anything about toy soldiers, hours of painting and such."  People who know me from work would undoubtedly say,"He seemed so normal" like those living next door to the ax murderer interviewed on the TV news.
Perhaps it is an manifestation of my mid-life crisis turning 50 and all.  May be it is me joining the social media craze a little late and using an old medium?
"Whatever", as the kids tend to say.  Nevertheless here I go...