Before the last convention - seems so long ago - I was given a bunch of Victrix Napoleonic era Highlanders so had gathered enough for a sizeable contingent.  As we were doing a Waterloo cavalry clash scenario I thought a square of infantry, or as it turned out a half-square, would be a good 'ground-filler' and obstruction for the swirling masses of cavalrymen.  I tacked these upon a chevron shaped board and had them in the battle.  However it seemed that most ignored them entirely, including myself apparently as I took no photos of them on the table! None. hmm.

Fast forward to the recent days when I was playing around with the groups of miscellaneous "petal" bases a gaming buddy and entrepreneur had cut for me as samples ( as I am planning to order more in the near future!).

3D-DZYN website for these bases and other good stuff.

I started arranging these and found that all the various 20mm rounds could be set up as a two-deep alignment and long enough to form part of a square formation, essential for facing a cavalry attack.  In this case, the rest of the square can be imagined off-table.

Of course the groups of bases can be placed in a line for those big-battalion games. 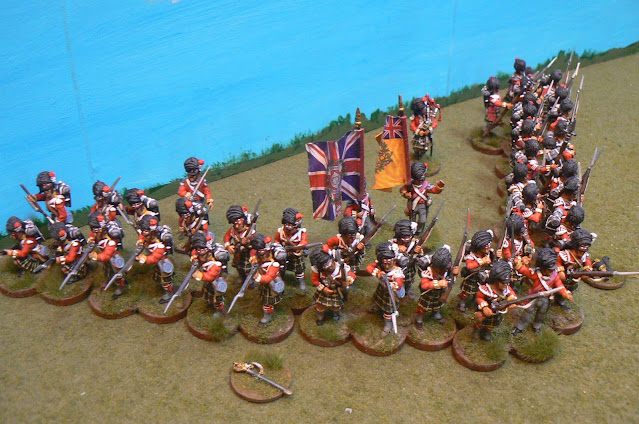 Well, for those who are strictly Horse and Musket fans, my first post today was a War of 1812/ACW style battle.  While I intended to space things out a bit and post a solo WW2 engagement later, I guess I hit the wrong button and posted it also today. 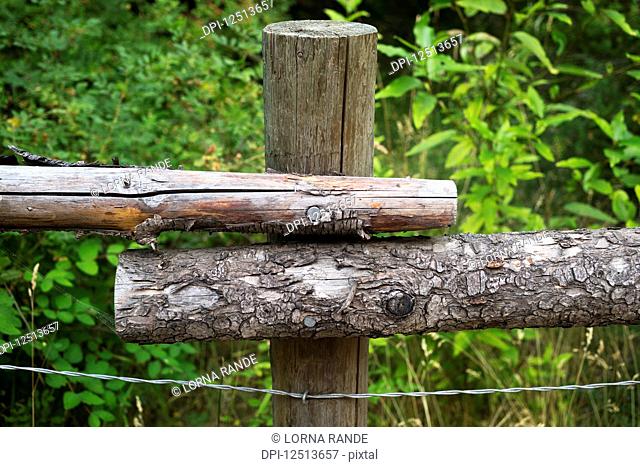 Once again an Australian Matilda tank finds itself alone in a Japanese village in 1946 (see previous post:  link  )

The Japanese (me, playing solo) planned a coordinated three sided attack by “lunge-mine” soldiers while the Japanese sniper would force the tank commander to button up making acquisition of his compatriots more difficult.  “Ieko” one of the Japanese attackers would be stationed in the temple and ring the bell within to indicate the tank has gone beyond the building commencing the attacks.

The Australian tank commander now realizing his infantry support was, well, not in support, had no intention to blithely move thru the village [ and I rolled no Move Dice! ]  While looking about above the hatch, he ordered his gunner to shoot into the nearest building. [ I did roll the appropriate dice so he could do that!]

“THAT should bring out any skulkers!” 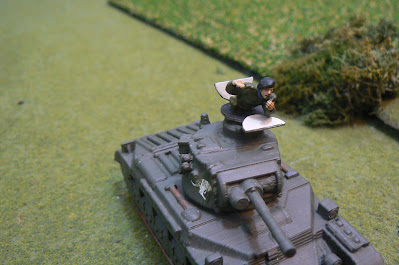 Ieko, observing through a slit in the window covering, noted the turret gun turn in his direction.  He rang the bell and took cover!

Teppo, the sniper, took a position around the corner of the building and fired. But to no effect. the Tank commander did not become aware he was being shot at.  Kenso, seeing the tank stop well outside a distance he could be expected to run (and that in front of the tank! ) decided to make his way thru the paddies to a position to the flank or rear of the tank. 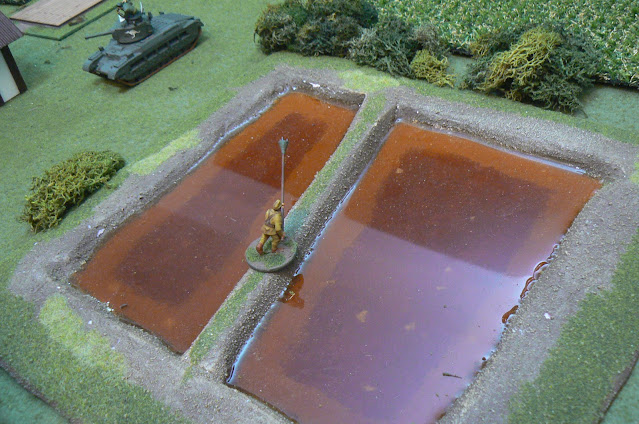 Editor note: For these games, I take the situation the miniature has at hand and try to make a logical and prudent decision of action before rolling its Command Dice.  This decision is often negated as the dice do not allow such, so I go with what the dice can allow. In this case I rolled three Move Dice and having no need of a Wild Die, also turned that into his run.  As the distance to the tank was considerable  so he went the other direction.  But of course the rolls I made for the distance would have had him safely to the tanks glacis and into the attack!  But that is 20/20 hindsight!

Meanwhile, the hull gunner was alert and spotted Teppo the sniper and opened up with his hull MG.  Poor Teppo was shredded with bullets as the main gun was reloaded.

Ichiro, crouching around the building’s corner having seen Teppo become chopped suey decided to move the OTHER way to in behind the now ruined temple. However with the dust of the explosion he too had no idea of the tank’s position [ no acquisition dice were rolled]

The commander still ‘unbuttoned’ with his head above the hatch, demanded “Gunner, fire at the next building where the body is”.   “Ah, the damned *** again!” was the reply.  No shot could be taken.  “Move ahead” the CO allowed.  “There’s a bugger. Turn right and take him” as the tank had acquired Ichiro. But perhaps slowed by some building debris (?) but the tank could only go a very short three inches.  [ I had rolled a paltry 3 on two dice!!]

Meanwhile…. in his fast pace, Kenso had gone beyond a 90 degree visual range of the tank and so failed to see it move off away from him.  However, Ieko recovered and had a chance for an attack.  My roll for the Japanese soldier was 1,1,2,3,4,4 meaning he could Move 1D, Move another 1D, Acquire the tank, Aim ("ready himself") and Fire (press the lunge mine detonator against the tank).  It is lucky he had two Move dice as I rolled two 1s but as the tank was literally at his door step….For his life , he caused one permanent and one temporary damage to the hard shell of the Matilda.

Immediately after Ichiro plunged his weapon against the frontal glacis of the tank. The explosion blew the commander out through the open hatch and destroyed his tank….the extra strike dice from being ‘unbuttoned’ proved fatal.

Solo play 28mm War of 1812 scenario “inspired by” [as Hollywood likes to state] the ACW battle of Cedar Creek. 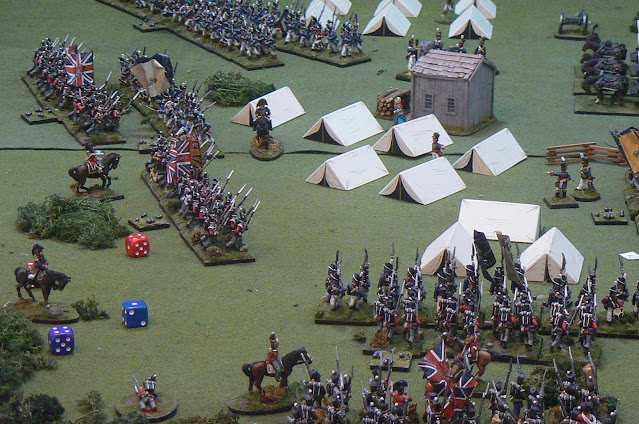 The early morning attack by the British/Confederate commander did not have the desired effect of the surprise and disorder of the numerous defending Americans/Union forces.   To simulate this potential disorder each American unit was given the number of disorder points equal to a d6 roll.  These disorder points could be quite inhibiting of combat and morale but true to my usual form, my rolling for this was low and so little disorder was shown in the American ranks. 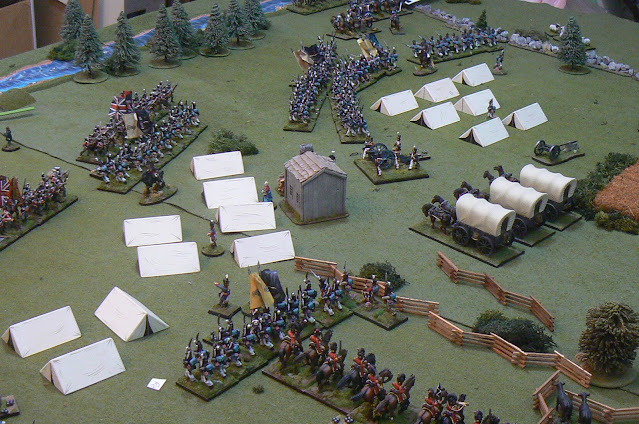 One of the most effected units was the large 9th US Regiment with four points of disorder (shown as ‘cannonballs’ in the following photo) and as it retreated back, threatened to crash into the second line of the 28th and 22nd US Regiments.  However a high roll for it’s “orders” allowed them to hold and start to regain its composure and prevented a rupture of the American centre. 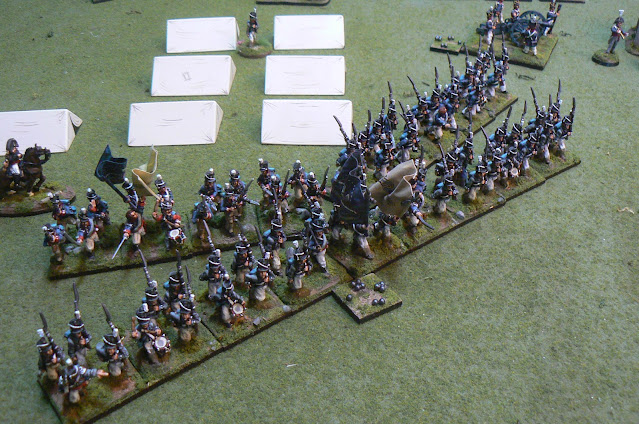 The other ‘Swiss’ regiment employed in Canada during the War of 1812, deMeuron, while decisively pushing back the 11th US in the middle, had been recovering from the effort and could not exploit the gap created. The remarkable firefight between the deWatteville and 25th US units had both units hors de combat.  The attack in the center had stalled.

To the south, the  Incorporated Militia of Upper Canada could not hold again the counterattack of the much larger 21st US and fell back through the Upper Canada Militia following up across the creek.  The disordered militia also now fell back.  This attack had failed.

The British commander (also me!) having placed British success (as did the original Confederate commander) upon the surprise attack against superior numbers and having his attacks quickly dissipate, ordered the withdrawal.
Finally got some of the collection on the table again.
Posted by DougH at 17:58 6 comments:
Newer Posts Older Posts Home
Subscribe to: Posts (Atom)