In a tiny village somewhere in Russia during the year 1812.....
One well-known rules which I have never played is the Two Fat Lardies “Sharp Practice”.  A couple of weeks ago, WillB offered to introduce in a game between his Russian Jagers and my newly painted never-yet-on-the-table dismounted French Dragoons.

Interesting mechanics but not much of way of tactics as we plowed through the elementary rules for only a few turns.  Definitely a small unit game.  The card/chit pulls and frequency are very important.  Not really enough time to make an assessment so more play is needed but they could be useful for other periods.

Nice to see my newbies on the table, nevertheless, along with the recently constructed Russian church.

Having just looked at my 15mm Zulu War collection the previous day when the call went out to host a game I thought of using them - they have been in the boxes much too long!  Hmm, using which rules?  Having played “The Men Who Would Be Kings” recently I figured I could guide everyone through and as JimF also joined, he could help.  Actually the first time using tribal forces by any of us (and it showed!) .

I took the roll of the Zulu in my recreation of the famous Battle of Isandhlwana so I wanted the British players awed by the numbers facing them. They were not; despite having painted and based the remaining 96 I had yet to do, during the previous day. This ultimately gave the Zulu 6 impi/units with 48 figures each.  Actually not as impressive as it might sound as TMWWBK has the British infantry unit at 12 figures and a tribal at 16.  My 48 still represents the 16 strong tribal unit but in bases rather than individual figures; but the look on the table does somewhat display the historical strength disparity in this battle.

I was discouraged almost immediately by my poor activation rolls for the Left Horn which did not get the order to advance apparently. Wrong side of the hill from the rest?  But the other impis were soon advancing at the double toward the British lines.

Francis commanding half the British which included the Natal Light Horse and he had them scout the plateau then do a sneaky move to go between two Impi,  which had left a gap, to move into the rear hoping to distract them (me) from advancing further.  I ignored that move and managed to move into contact of the left flank British company destroying half of that formation but excellent dice rolling by Jim (six of the twelve dice were 6s!) had my boys bounce off.  That was the closest the Zulu would get to any victory.  The overwhelming firepower by the British would not allow the Zulu to make contact despite their excellent discipline.

The Left Horn finally came into range but by then the other units were spent.  In the post battle analysis, my advance without waiting for the Left Horn units was criticized as not timing the attack to arrive together. Probably correct. Using “Go To Ground” activation might have saved those units of ‘the Loin’ shot up, for later.  Also we started to talk of tactics (!) like using one unit in line to soak up hits as others come behind still fresh.  I set up my units as per the historical model and the usual Zulu way, but food for thought.

While using 15mm figures, we made no changes to the rules including that of distances so using inches.  The Zulus with the extra d6 of movement and my unusually good activation die rolls for most of the game had them moving rapidly…into the rifle fire…. and defeat. History not repeated.


The 2nd Westphalian Cuirassiers created in 1810 followed the Grande Armee into the depths of Russia during Napoleon’s ill-fated 1812 campaign from which few survived and the unit was never reestablished.  While historically limited to only one campaign, however the unit has an interesting uniform which I could make out of some spare plastic bits from a larger trade I made recently.  Among the trade items was plastic Perry models still on the one sprue but missing some bits.  A look into my parts-bin replaced some of the missing arms and equipment, etc.  The helmets are really the only difference from the French version and minor at that;  so I could easily remove the French horsehair and greenstuff the appropriate woollen comb of the Westphalians.  The only other major difference having the saddle cloth in the regimental orange. (for the French it was dark blue)

For the rivet counters: The 1st Westphalian Cuirassiers wore white but had only a frontal cuirass but no back plate.  And no, I will not want to try to scrape away the back to make that particular unit. One unit of Westphalian cuirassiers is plenty, thank you. 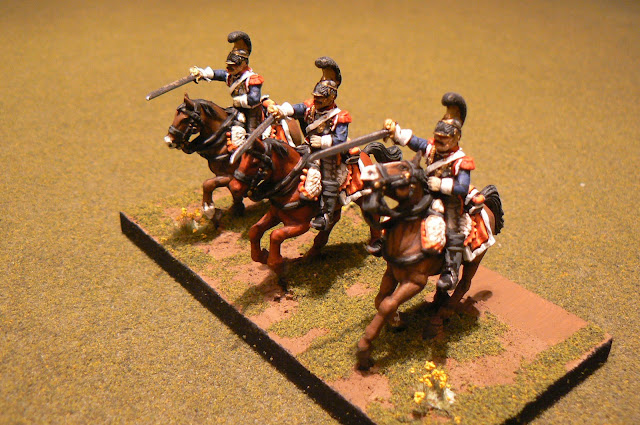 a wargamer's aside:
What was the worst order in military history?
In First Place:
" Lord Raglan wishes the Light Brigade to advance rapidly to the front...."
and in Second Place:
"Hello, MegloMiniatures? I would like to purchase 182 packs of...."
Posted by DougH at 18:52 4 comments:
Labels: GdC, green stuff, modeling, Napoleonics, Uniforms, Westphalians
Newer Posts Older Posts Home
Subscribe to: Posts (Atom)