Having winter terrain (my Retreat from Moscow game) and Russian early war tanks models, I thought that I might be tempted to do the ‘frozen gates of Moscow’ Nov-Dec.,1941and do WaT with a winter style.

I invited a bunch of the guys over with tank models to have a go at these clear rules. After a quite a long discussion over sizing (who knew that the difference between 1:48 and 1:56 could be so much!) and it was determined that my KV-1A model was 1:48 scale and so we went with that.  Jim brought his Matilda II, in jungle dark green(!); ChrisP brought a Stuart (a lend-lease not offered until 1942 so we cheated a bit there and he was reluctant to apply a whitewash over a rather bright green color-scheme.  I used the big KV-1a along with the truck full of engineers and explosives for the scenario.

On the German side, Gord grabbed one of Bill’s numerous builds, the non-white-washed 38, while Bill used the other with an artistic whitewash motif.  Clayton used my T-34 with German markings as the third tank.  The points were even for each side with 3 tanks aside.

The Russians were trying to blow the critical bridge before the Germans foremost troop of armour could control it and the town.  Lots of manoeuvring and die rolling in this game but the Germans got to the town first and concealed themselves well, awaiting the Russian advance.  The Russians need the engineers to blow the bridge; but as we can see, it was not to be, so Jim and his Matilda had to destroy it with shot.  Chris’  Stuart tank, we nicknamed “Stewie” was unfortunately brewed near the end of the game, the only casualty.

But the bridge’s destruction was after Bill, in a rather bold move - either silly or a brilliant tactical maneuver depending upon result - used a fist full of Drive Dice to move out of the town, over the bridge and move swiftly around to the flank of the slow turreted KV in order to destroy the truck from behind its KV protector.  Russian panic enthused with my dice rolling slowly spinning the KV around with slow turret movement while the truck [we gave it command dice for movement only - for those knowing the rules the Drive Dice and Wild Dice as usual and with the Acquire Dice convertible to a Drive Dice but only if on the road.  All other Command Dice were ignored] needed to go off road to get away from the rampaging German tank.  While with all this slow motion maneuvering (I was rolling low for movement inches) it managed to block the line of site of the KV to its attacker which did not help.  Bill was relieved to have survived the Russian beast and promptly blew up the truck and the engineers and all their explosives within.

The KV, without the need to protect the truck, and too slow to engage the fast 38, lumbered forward to engage its original target of Clayton’s T-34(r).  We extended the game another turn as the destruction of that tank would not allow the Germans to maintain their scenario conditions.  However, no further effects were made and both sides had achieved minor victories.  I hope the boys enjoyed the play on the white cloth of Russia.... 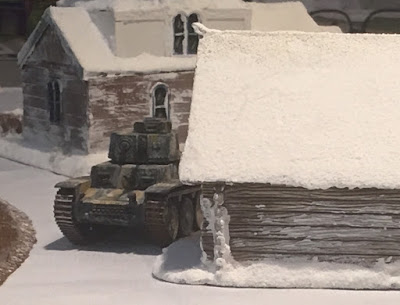