The Battle of Borodino - finally, the game! 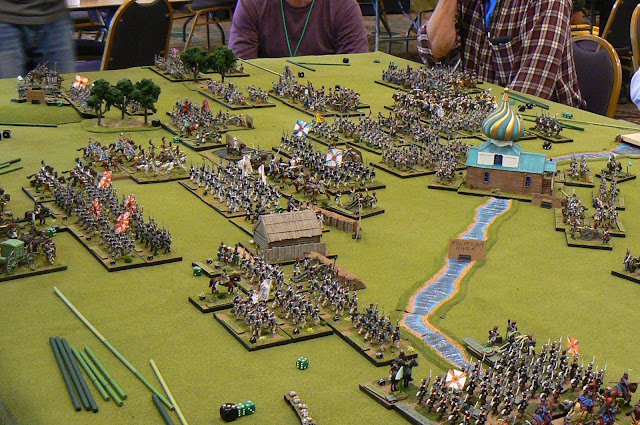 Finally the day arrived when we could finally place down all the miniatures on the table to do the game which many of us had done much effort to create.  I was worried (but had plans to compensate for) any of the boys not coming through with the figures they had promised to paint.   But they all came through.  Thanks guys.  Good job!

Mind you I still had one gentlemen who had me extremely concerned as, even on the morning of the game, he said he was going to apply the flocking and it should be dried in time if he left them in the car to bake in the sun!  He offered beer to calm my heart.  It helped.

After an extensive “training” session so that players would not make poor tactical decisions thereby granting their figures more time on the table, we got to it.

The deployments were based on the historical model but I allowed the players to rearrange within the area to their own whims.  The two what-ifs I allowed was the possibility of Napoleon releasing the French Imperial Guard but only if he thought the battle was won.  However the battle might only be won if the Guard was used. Nice Catch-22……

The other was the use of the Russian artillery reserve which was not used during the real battle. However if used too much the Russian army counts down in their morale (which did indeed happen)

Obviously those who painted up their corps commanded those and a few who are regulars to the rules had their pick of commands.  Seth and I were the umpires and later commanders; and we had a good number of the players with good knowledge of the rules to mentor the others, so we had very little of the usual rules confusion you encounter in many other types of games at conventions.

Russians:
DavidB with his Tuchov’s Corps and of Sieven’s cavalry
RonP  commanded my Borozdin Corps
StevenN commanded his painted horse of Korff
RodF with his Dokhtorov’s corps
JamesC commanded his Raevsky corps in the centre and his Karpov’s cossacks on the left
BobS commanded his Baggovout’s corps on the Russian right


The French and allies were all painted by me and were commanded by:
BobE with Murat and Ney (he went through all the tutorials and could handle both easily!)
Morand by Keith
Eugene on the left by Lance.
Junot’s Westphalians by Preston
Davout by ShawnMcElvoy
and Pontiatowski by Mark Serafin


The ratio of artillery to troops in this historic battle was the most of any major engagement and so the artillery in this game was truly a killer.  The players soon found that their forces were weakened well before any combat began.  For those who played the rules before, this was expected, but for the couple of “parachuted” players who signed up, this proved not the usual easy-go style of wargame for them and I was extremely annoyed that they had the audacity to whine and complain that “I can’t even do anything!” Or in otherwise, gleefully charge and win. What did they expect?!  For what I and the many other players, understood to be a realistic representation of the horrible blood-fest of the Napoleonic battle. Davout complained that “there is no way I am going to win”  Well, you are in the middle of the battle and facing lots of artillery and must take a heavily defended fortification!  No one said war is fair. Or we have Poniatowski faced with retreating cossacks and a defensive position on a hill, but certainly not admitting that his movement/command rolls were well under average, yelled at me (!) that “what can I do with all that against me!!”  Again, who said war is fair.  Either leave or try your best I respond.   Like I say, extremely annoying and a real buzz-kill to the enjoyment of the all the others who committed a lot of energy into this project.
(footnote: their side decisively won nevertheless….)

The game itself turned out to be roughly to the historical form.  The vast amounts of Russian artillery weakened the attacking French, while the French “grand battery” of Davout’s ground down the Russian numbers.

Cavalry reserves managed to get into it after the infantry losses gave them the room to maneuver and the clash of Murat’s heavies vs Korff’s horsemen was one of the highlights.

However, as is the case of many Napoleonic battles the reserves, or lack thereof, would determine the outcome.  It was thought the time had come that the French Guard could be committed and Napoleon released the Young Guard to secure the Fleches and the Guard Horse to support Murat.  Likewise, Lavrov’s cuirassiers were sent to support the middle.  However both failed to engage and it was the hard work of the centre commands of the French to force the victory.

Over on the Russian Right / French Left, the Kolocha River divided the battlefield. (which while not uncrossable, did disorder which has great effect on the troops) Both Platov’s horse (which historically went for a ride into the French Left) was also followed by Baggovout’s infantry corps;  moved over the river and seemingly had a mutually agreeable standoff with Eugene’s large corps.  Observing that “not much is happening over here.  Are you having fun?”  They both said yes at the same time.  So I left them to it.  Can’t complain if the boys are enjoying themselves!

Tolstoy’s command was originally assigned but that player unfortunately needed to leave (telling us in advance politely) and it was reassigned. Apparently while “orders’ were given that it move to the centre and while some movement was done, it was largely forgotten in its defensive roll to protect Gorki (another victory point).  Together with the inert Russian Guard of Lavrov and Baggovout’s corps, the Russian Right was intact and was deemed to be able to withdraw without difficulty.  The Russian centre was however destroyed and Tuchov’s corps was on its last legs and Karpov’s cossacks nearly eliminated.  While the French were in bad shape, the battle gave no doubt as to the victor.  The French gave a tired hurrah. A long battle.  As Seth suggested not only are the command morale flagging but that of the players as well.

A quick presentation was given and a couple of artillery models were given to James who held up well defending the Redoubt against heavy attack with his well based figures and his good attitude.  The Tzar model was given to BobE for his help mentoring others and the hard slog in the middle, again without complaint.  He knew what to expect. It was The Battle of Borodino was it not!
Posted by DougH at 12:32 14 comments:
Labels: Borodino, Enfilade, Historical Battles, hosted games, Polish, Russians, Westphalians

In the novel "Catch-22" the author gives his character a dilemma: For someone who wants to get out the army he has to be considered crazy.  But anyone who wants out of the army isn't really crazy is he?
This catches us in our lives also.  If you need money you might ask a bank for a loan.  But for the bank to give you the money, they always ask if you have collateral ( in other words - if you have any money!)
Napoleon offered himself the same dilemma: To throw in the Imperial Guard, his last reserves, he first wanted to be assured of victory.  But to gain that victory the Guard needed to be used.

Historically, Napoleon did not commit the Guard as he wanted to have these precious troops retained being so far from France - to no end as it turned out.  But was victory at Borodino obtainable with their use? Perhaps, if Napoleon allows in our replay, we might find out.
The battle in one week.

Helping a fellow wargamers with some hussar uniform information such as the colour of dolmans and their breeches and....

The Wife responds "Dear, pelisse don't go on about it!" 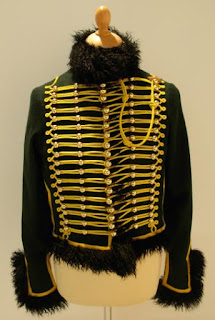 The new job is such a time-kill.  So I am really struggling to get the time to paint.  Thus, these and the other units I have done recently have been rushed and suffer from that, and perhaps from a poorer eyesight I must grudging admit.  However I have finally got the last of Lavrov's 5th Corps (the Russian Imperial Guard) done.  These cuirassier regiments of the Emperor's in dark blue facings and the Empress's in rose , were combined with the Guard Infantry to be the "Shock Force" of the combined Russian armies at Borodino. However it seems poor Lavrov had a "nervous breakdown" and thus the corps command was compromised.  It was thus not really directed into the battle in a meaningful way but was committed into minor counter-attacks throughout the battle.  We shall see how this pans out during our re-fight. 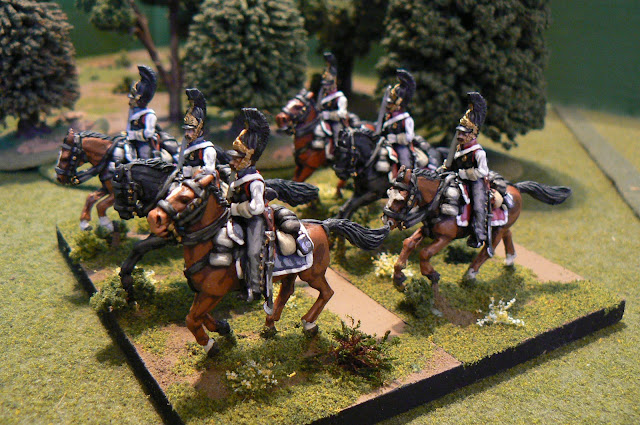 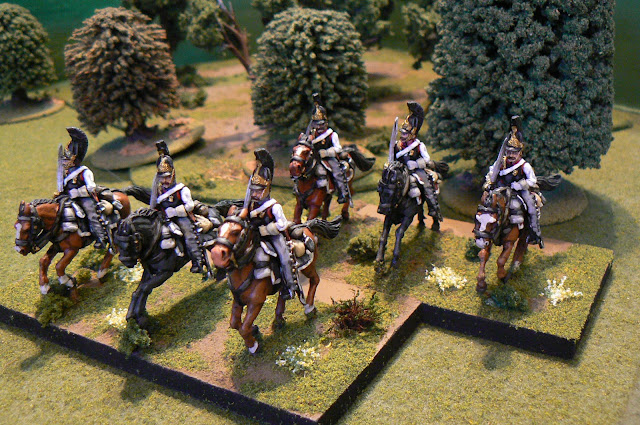