A request from Ron, had me thinking about bases.  He was starting up a new MDF company and wanted new ideas for bases.   I suggested 'petals' and 'clumps'.

Let me explain.  When doing my Samurai army, I went to thin wood rather than card as it would be stiffer as they were carrying multiple metal figures in a spread out group 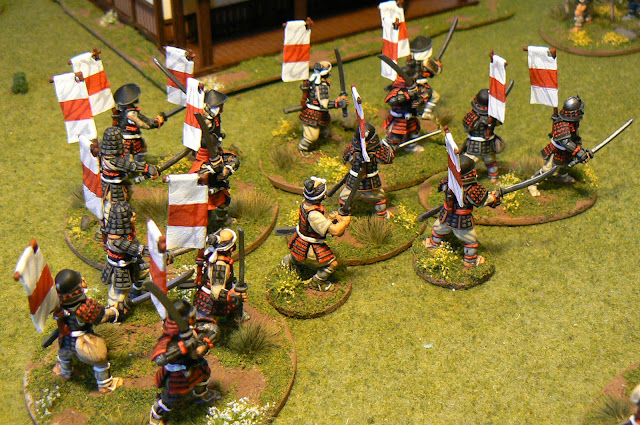 A trip to the art store Micheal's produced various circles,  ovals and a flower petal cutout which I could get numerous small circles.  I left one roughly intact for the musician/banner group

From any distance it looked like a group of individual stands rather than one single element. Too bad it was almost the last stand to be done or I may have altered my basing scheme from the start!

But this in mind, I suggested to Ron this petal ideas along with clumps of seemingly singles all attached to make group moves made easy.  I don't like the sabot concept and do enjoy the look of each figure as an individual; but as moving individual figures, especially stretched across a table at full extension time after time is rather tedious and sore on the back, it gives the benefits of both.

We can see this in this photo of a line of six Roman Auxilia being held, as if by magic by two digits of the hand.

The rest of the army is grouped in various sizes to offer any combo of casualties to the unit.  I have subsequently suggested two rank versions which again offers a look of individually based miniatures but with a group move effect.

You can see his comments on his company's blog at: https://www.3d-dzyn.com
He is going over pricing currently and hopes to start in earnest in August.  I will put in an order for more!