Surprised no one wondered why cuirassiers, hussars and all manner of horsemen were tasked to escort wagons but such are questions best unspoken when a scenario must be designed with only a vague idea of the number of players coming.  However the “escort the wagons” is always a good option for any era.  As the game was another “pley-test” of  “Hussar Rampant” it was all horse using every painted unit available, both my French and Dutch-Belgians and WiilB’s borrowed Russians and French Dragoons, giving the 8 players three units each.  This was to be the largest of the games so far at 24 units on the table.

Also testing the rules was the utter mess of deployment,  with the French escorting the wagons and  units helping from the town and against Russian forces coming in from all angles from the random diced approaches which inevitably creates a bit of chaotic action.  However if this confusion still has the rules working despite unique or challenging situations, then it might survive any test.

So it was that the game had the wagons almost within range of the town and causing some of the Russian players bemoan the task unaware however that at 8+ activation, the wagons would be hard to move along.  DaveMc wanted the cossacks  in order to burn and loot (and not just capture) and surprisingly used them ‘cossackian’ style avoiding most contacts but as their real-life counterparts, were a quite the nuisance.  The cuirassiers both Russian, under the able command of ChrisO, and French ones, were hard to kill, and the lancers with their ”pointy-stick” bonus had a big punch.  The lights and hussars, with greater movement rates, could dance around ( or should!).

The wagons, safe for a while, but with French losses and little movement, they inevitability were captured or in one case, burnt by cossacks. 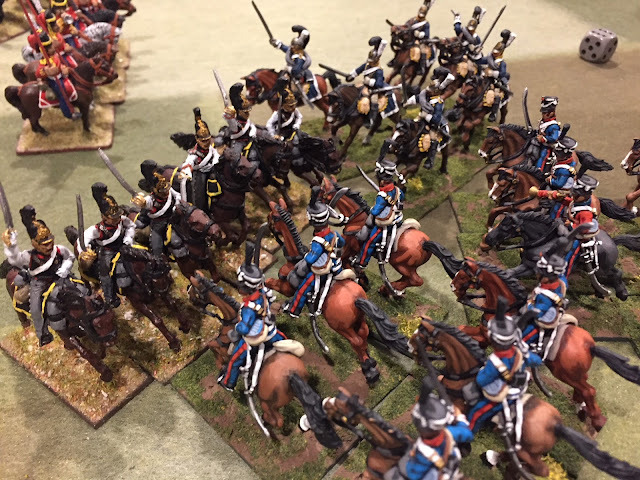