My collection of AWI is in its third incarnation. The first was old Minifig true 25s.  The next was, and still but only with my AWI French,  Front Rank.  And finally now Perry metals - for the most part.

But I finally broke down to buy a box of Perry plastic Continentals while I await a Perry metal order  delayed due to Covid.  I thought they would be compatible.  Surprisingly for Perrys they sort of aren't; at least to my old eyes.  The plastics are much thinner and a bit taller.  Really nice, Beautiful. Would have liked shooting poses but as marching, nice.  Now of course seeing the transformation of the Perry sculpting to this much better human proportions, better proportioned weapons particularly in plastics compared to their early lines which included their AWI range, I probably should have been patient and await them*.   I nevertheless painted 6 for a small Loyalist unit 'King's Loyal Americans' which accompanied Burgoyne into the Albany Valley to Saratoga .  The remainder must stay in the box for now.  Should I later get excited about a Southern campaign I might be led to create a large unit of South Carolinian continentals - the spare hats included in the box have that distinctive cap worn by those colonialist. Or more probable, get traded or sold....the usual.

I picked up a base of the unit and took this quick pic. I hate the macro lens as it shows off all the minor issues of the painting when a more steady hand, better eye (or use of the mag lens ) and certainly more patience would be useful. They are not "El Mercenario" standard ( examples of his painting ) however for about 21 minutes per, OK for the table.... but I really need a longer arm! 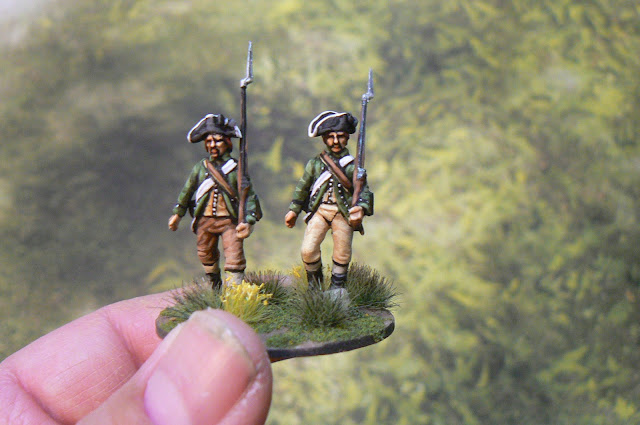 edit*  Funnily enough the day after composing this post --they came in the mail!
Posted by DougH at 22:36
Labels: "Saratoga" AWI, AWI, minis, musings, RaP