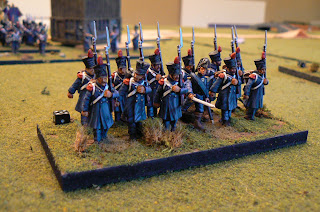 This unique Napoleonic unit(s) fought during the 1813 and 1814 campaigns when after destroying his Grande Armee in Russia, Napoleon looked to various sources of manpower.  The naval ships, blockaded in harbors, proved to be a surprisingly good source of quality troops in this regard. While often incorrectly titled as 'Marines',  these Naval Artillery units could be considered elite, or at least, very reliable and conducted themselves well in an infantry role.

While there is some debate about the uniform and color of the belts, I went with the "classic" dark blue artillery overcoat, white belts and red shoulder fringes.  The distinctive carrot-shaped pompon of these units, I made, adding a bit of 'green stuff' to the existing round pompon on the shako.  I got them sort of the same size and my heavy coats of paint hides many imperfections. 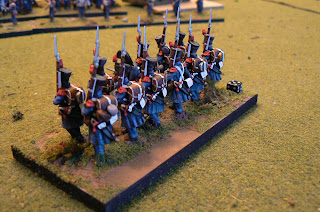 The small d6 die is placed within a divot in the terrain and used to indicate any change in the unit's morale/hits.  The blank space in the rear will be used to easily attach the unit's commander's name for game purposes.

I'll add a photo of my Imperial Guard.  One can understand the Prussian reports from the fight for Mockern during the Battle of Leipzig (1813) mistakingly having fought with elements of the French Guard rather than these fine units. 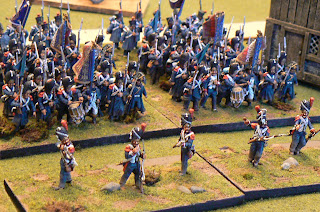