Having picked up Old Glory's pack of "Men of Color" (Why? Umm. Let's not get into the psychology of that at this time...) I obviously needed to create one of the few units of all coloreds from this war.  Lacoste's battalion fought in the New Orleans campaign (see my previous post ).  For this I used the 'better-dressed' poses from the Old Glory pack   [the others with smocks, I will use as Daquin's smaller unit of the same campaign.

Here is my finished version: 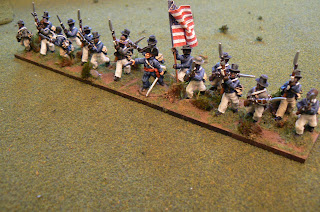 However, a lesser known unit which fought against the American invasion of Upper Canada in 1812 was 'Rauchney's Colored Corps' which contested Queenston Heights.   History: ( link)

Here is my finish version: 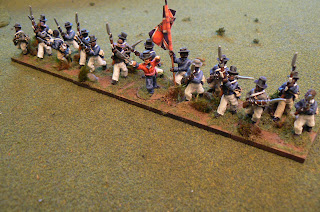 The astute viewer will note of course that it is indeed the same unit with a different officer which I can substitute either with the blue coated officer and placing of an American flag or a red coated officer and the Union Jack.

The officers are placed on pennies with a sabot set up: 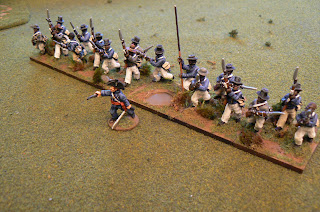 The placing on the pennies turned out to be more elaborate than I had anticipated as the Old Glory based were so thick and when placed on the pennies put them as giants with the rank and file.  Thus I removed the bases and placed them in 'green stuff' to create the ground work.  However much faster than painting up another unit, eh.