Our big Napoleonic game for the upcoming Enfilade! convention in Olympia, Washington State this year is Eylau.  A large, but largely indecisive battle between the French and Russians.  This battle was notable for the very large cavalry charge led by the flamboyant French cavalier Joachim Murat across the snows to charge the masses of Russians during this winter battle.

Many paintings of this event have been produced to portray this colourful character of history.

While I already have a figure of him in his uniform during the battle of Heilsburg (see my previous post: link ),  this fashionista was notable for his various attire. Each was distinctive at the different battle and as we have one player paying us in beer in order to command the massed French heavy horse,  I decided we must have him play with the correct miniature.

I initially was going to make the model myself out of the plastic bits plus a lot of ‘green stuff’ but then noted that the figure manufacturer “Gringo40” offered a good option.

I purchased him  (plus three Mamelukes to fill out the order).  Still, the price along with shipping, seemed quite expensive.  The minis, including our Monsieur Murat,  are a bit tall having rather thick bases for the normal 28mm,  as have done with this Murat, I will need to dig trenches in the MDF base to place the figures into, to drop the height somewhat.

The Gringo40 figure is not badly done with the pose obviously based on a famous painting (see above).  However, that absolutely ridiculous sword I removed,  replacing with the proper riding whip 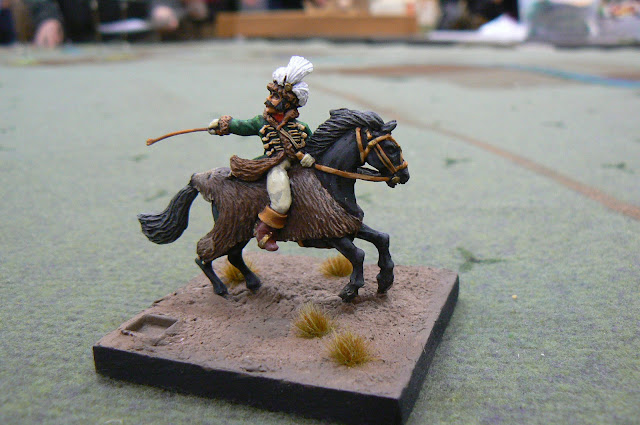 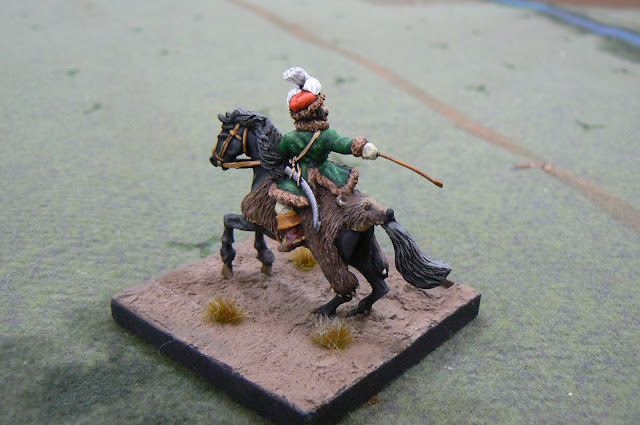 The ground work is incomplete.  The battle, and thus his fur-lined cloak, were for the winter conditions which apparently were horrible with snow and freezing conditions.  This would suggest a snow covered terrain on the base.  However the rest of the armies are with green grass as will be the tabletop terrain.  We will fight the battle in May not February so no snow. Thus the whitened base will look very strange on the table and go very much against my ideal of visual continuity.

Ah, these little wargaming hobby dilemmas which keep us up at night  :)