Again in the Russian steppes

A Monday night game at Francis' which unfortunately for me is a bit of rarity these days.  While they are building planes for the latest 'Dave Craze' (1:72 scale WW1 planes for Canvas Eagles) the boys are playing a lot of WW2 15mm. Both Francis and Dave have big collections.

I joined Kev for a German attack upon a Russian strongpoint. I will not bore you will a blow by blow, but let it be said that the Russian dice were not very good and with the poor Russian 'training' and the Battlefront rules which hamper ill-trained troops, the battle was one-sided even though technically, with no time left in the night, the Germans had not penetrated the Russian defenses. (more a fault of the scenario (distance) than casualties or such)
For a rare time, I seemed to have the best of the dice, with at least five T-34's destroyed by time end....and one plane!
Oh and that plane I mentioned I had shot down, by a tank no less?  And thankful I did too as Dave forgot to bring the proper model (and it was the "special thing" of the scenario!)  so substituted this white 'object' unpainted upon the table!  Shame, shame! 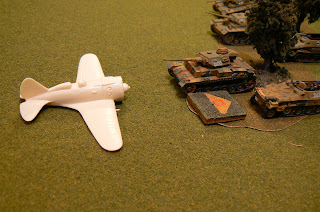