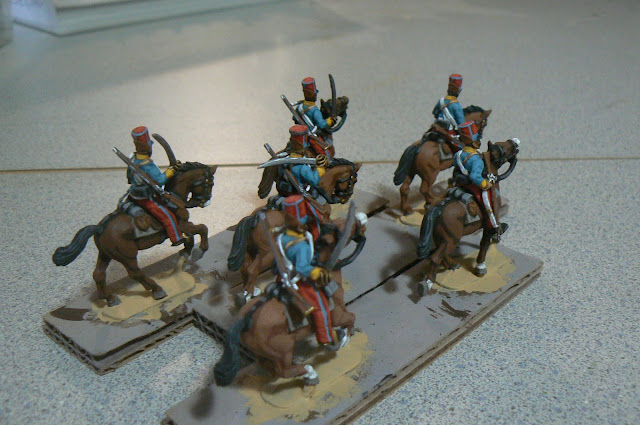 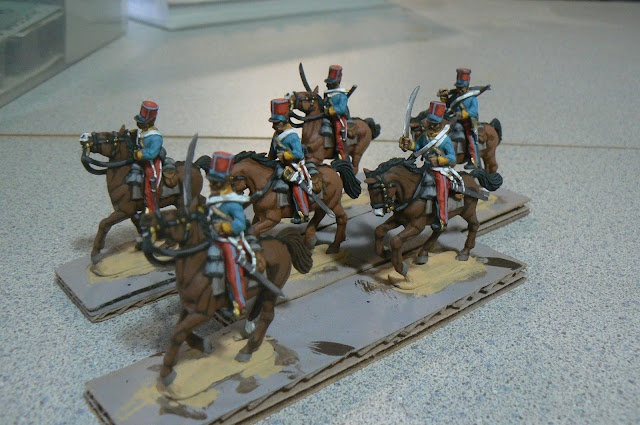 My small unit of 28mm Chasseurs d'Afrique during the French occupation of Algeria in the 1830’s.  This is much earlier than the Beau Geste era so the uniforms are more Napoleonic than ‘colonial’.
I based the army as my original infantry I made (converted from Napoleonics in overcoats but with the distinctive tall red cap -see below) are the French Foreign Legion who would be sent to Spain in 1836 for the Carlist War.  The uniform in Algeria would be changed in the meantime. Thus the early time frame. Still flintlock muskets at this time.
Obvious not based up yet.  Made from Perry plastic ACW cavalry horses, 3 of the riders are also ACW but the others kitbashed from various Napoleonic bits - French and Austrian. A bit of scraping and different colour of paint hides the American-ish of them <grin>

Still haven't an opposition however. Sigh.  Might wait for the company "1898" to develop their Berber range or still have them as 'hidden' marksmen in hill and scrub....
Posted by DougH at 00:49
Labels: Algeria 1834, Plastics