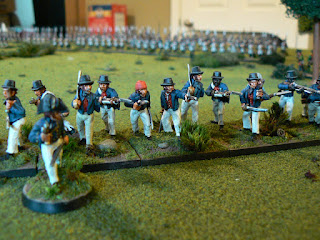 I have just completed my British landing party of sailors I have previously reviewed (see:  http://dotsofpaint.blogspot.com/2012/01/miniatures-review-brigade-games-british.html  ) I rushed to complete and hit them with a coat of protective spray outside while the weather was good.  The city [Vancouver, Canada] does not get very many days of sun, dry, and windless days; and even less likely all together, during the winter and one must take advantage of the conditions should they occur!
And excited about getting this unit done, I spend time into the early hours basing them.  Rather than placing them into a beach-like sand terrain, I decided to continue with my normal way of terraining the bases with pre-colored wood putty and use of flocking to match the table mat.  The 'shurubbery ' is naturally growing moss found on many rocks and trees of the area which surprisingly does not dry out when plucked and looks, well, natural. 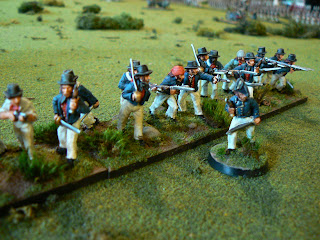 The painting went OK, but I had a tough time doing my usual highlighting as the 'folds' of the clothing is quite subtle in the sculpts.  Now this is not to say it is bad.  Quite realistic in fact.  Rather than the exaggerated folds and undercuts of other sculptures this would very much serve the "block" painter who uses either a simple one color effect or washes.
And I would admit that I am not spending as much time on painting as I have in the past; doing with less (perhaps because of less time and older eyes?) but OK still for the tabletop.
Posted by DougH at 12:31
Labels: minis, War of 1812