I finally did a quick (ahem) basing of those French elements I have painted for the Battle of Hanau (1813) for Seth's scenario to be played at Enfilade 2013.
The rules will  be a DBx version with step-down "morale" rather than recoils as an attrition factor.

I present the first photo 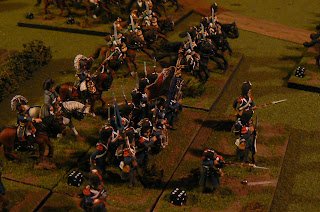 Now, did the small [7mm] black dice jump out of the photo? Hopefully not.

As we only need a 6 max to 1 min spread in the attrition, d6 will do nicely. While the marking of the attrition originally took some different methods, using a d6 seemed the most elegant. Originally we thought to use different colored dice in 'national' colors (French in blue, Austrians in white, etc.) but I finally settled on black in order to make them as obscure as possible yet visible enough when needed for the game.  Hopefully the eye is not drawn to them in a too bold a manner. 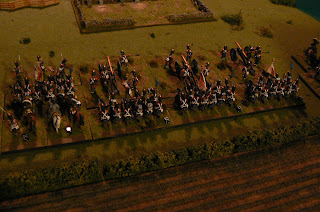 The infantry elements themselves are 12cm by 6cm which Seth settled upon and cut using thick MDF hardboard.  Artillery 12 x 12cm.  Good to pick up these largish bases without hopefully harming the predominately plastic figures.

To command the lot, are the Generals elements.  I have made the commander's name (in this case the Guard's Drouot) as separate cards in a matching green color to the basing flock which is to be temporary stuck on the commanding element and those of all the elements it commands.
The point, of course, that the name on the label can be changed to suit different battles or scenarios and use the same miniatures.

The use of the label will make the game management smoother as each player can quickly identify his troops.  Any Napoleonics buff worth the moniker should readily identify at least a heavy cavalry unit from a light.  I will have the unit's ID on the bottom of each base should that be necessary or interesting to know ;-) 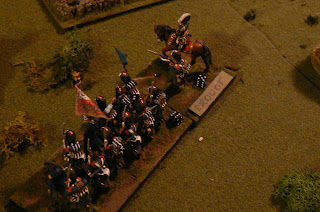