Once again a sale item gets me into trouble.  Well "wargamer trouble" I should say.  This trouble is generally not bad but perhaps troublesome is a better word.  Troublesome because phrases are uttered such as  "Hmm, I could do a campaign if I get another 200 figures", or "Perhaps if I just....."

This is what I was thinking as I bought this "African Queen" style boat at the Bring and Buy for a very small amount.  Can't help myself.  But what to use it for?? 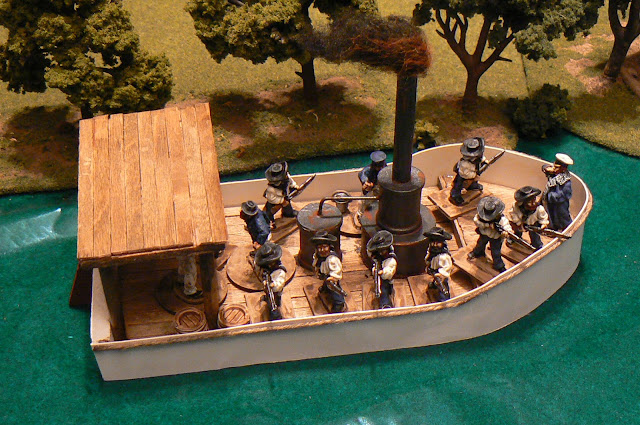 So it lingered in one of the boxes for a couple of years until the other day I found it and had a look.  It is made of a simple MDF bottom and styrene sides cut not particularly straight, a thick wood canopy and steering rudder with a wooden stir stick roof.  The open engine is of wooden thread dowels and a plastic straw! 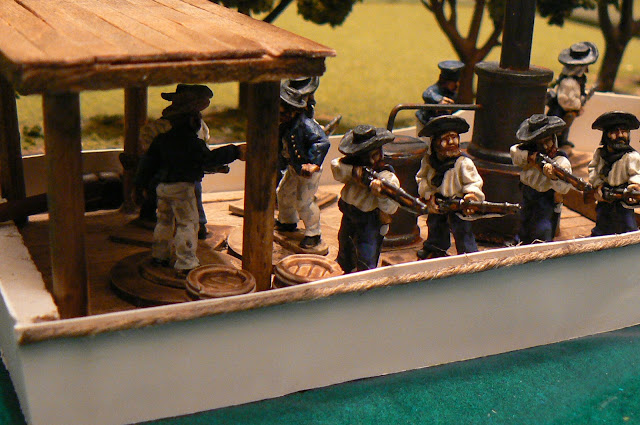 I had a separate group of sailors (Foundry for Crimea era, I think) painted but not based.  Reason?  Unknown.  They are mine but when painted?  Apparently years ago.  Anyway,  I just used small bits of card for their bases painting and giving those a wash to match the existing the wood decking.  The boat got a bit of a clean up adding a couple of barrels and the boilers were given a bit of rust for effect.

The actual interest into the boat was the discovery of primered Foundry Napoleonic sailors.  These were in fighting mode holding swords and pistols.  I have done sailors already with Brigade Games types but the two do not match well.  With the thought to crew my "African Queen" , I cut off hands holding swords and replaced with plastic ones, trimming remaining hands holding belaying pins which cannot be cutoff into tool-like shapes.   One of them I cut off the head as the hat seemed a little too Napoleonic and replaced by a French fusilier forage cap appropriately trimmed of the piping lace but now nondescript!  Hopefully all are looking mid-19th C. to go along with the rather crude steam engine. 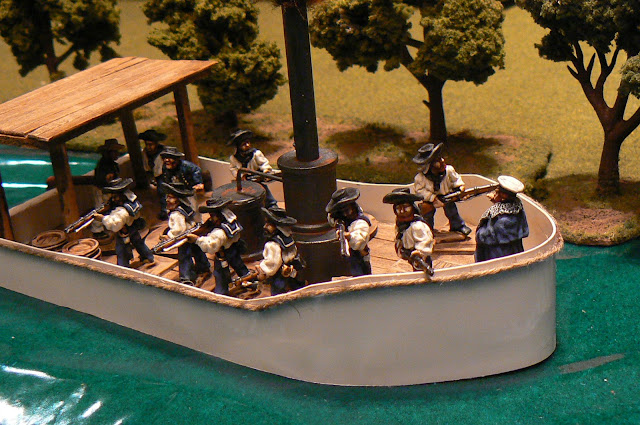 Now I have the crew and armed sailors ready for action up a river.  Which river and against whom is unknown.  I am happy with my little endevour but have no plans for a campaign with them....yet....
Posted by DougH at 14:31
Labels: equipment, modelling